Let’s get straight to it: does growing a beard really trigger hair loss?

This sounds like a stupid question of,  but while the short answer is no, there are scientific studies that have least drawn a link between having an abundance of facial hair and absolutely nothing on top.

With so many walking embodiments for the ‘bald guy with a beard look’, there’s a clear need to explore this and understand the exact effect that testosterone and DHT has on the follicles located on different parts of the body.

In this post, we’ll look at this in closer detail, and ask why so many bald men also boast thick and defined facial hair?

While there are no exact figures on how many bald men in the UK have facial hair, this is a common look and one that offers many advantages to males in the modern age. This can shape and definition to the face, while also restoring the balance that is often lost when an individual’s hairline begins to recede.

This can create a more attractive and younger look, and one that has also been popularised by several Hollywood stars (such as Bruce Willis) over the course of the last decade.

As we’ve already touched upon, science also has a role to play in the correlation that exists between a bald head and a thick, fulsome beard. More specifically, both scalp and facial follicles are sensitive to DHT (or Dihydrotestosterone) and testosterone, particularly in those who have a predisposition to male pattern baldness.

Even once you begin to see signs of genetic hair loss on the top of your head and your crown, it’s important to note that the effect of DHT and testosterone on facial hair is far more variable.

In fact, the exact impact of DHT on facial hair depends on your distribution of receptors for this steroid, and in most cases a high level of sensitivity to testosterone makes you genetically more likely to grow a thick beard.

This supports the assertion that facial hair growth is purely androgenic, whereas the cultivation of scalp hair can be affected by a number of alternative factors.

While testosterone promote beard thickness and follicle stimulation, the DHT steroid increases linear growth and density of your facial hair. 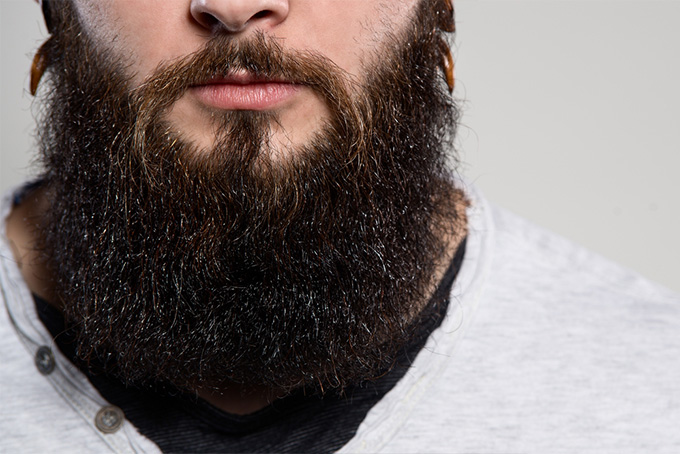 This creates an interesting juxtaposition, as the hair follicles on the scalp tend to react entirely different to DHT and testosterone than those on the face. It also exposes one of the greatest myths surrounding male pattern baldness and DHT, as many people believe that hair loss or excess growth relates directly to the level of testosterone in the body.

In fact, individuals who lose their hair or grow a thick beard tend to have the same level of testosterone.

Instead, it is how specific areas of your body react to testosterone that determines growth levels, which your genetic profile ultimately dictating where and how quickly you grow hair.

So, while growing a beard does not directly cause you to lose hair, it’s fair to surmise that individuals with male pattern baldness are genetically predisposed to grow thick, striking and visually impressive examples of facial hair.

A Genetic Expose – Do Men go Bald to Compromise for the Impact of Facial Hair?

While it’s widely accepted that the relationship between hair loss and beard growth is heavily influenced by testosterone and DHT, some scientific studies have raised other, more fanciful topics of conversation.

One particularly interesting hypothesis emerged from a study completed in 1988, which compared the rate of sweat evaporation on different parts of the body. It discovered that the area of skin typically covered by male facial hair correlated almost exactly with the sweat glands on the forehead and the calvaria (or the top of the head to you and me).

Not only this, but the rate of sweat evaporation was far higher on the forehead than the area where facial hair grows. This is a trend that continues even as an individual begins to lose their hair, with the variable rates of sweat evaporation remaining largely unchanged during this period.

It’s interesting to note that such a difference in sweat evaporation rates is only prevalent in adult males, with women and children showcasing no such variations in various clinical studies across the globe.

These unique and unusual findings fascinated scientists, encouraging them to believe that men who grow and maintain beards subsequently secrete more sweat from their forehead and crown. Additionally, they also hypothesised that growing a beard causes men to retain additional heat, which may be a little too uncomfortable for the human body to bear.

As a result of this, scientists have claimed that genetic issues such as male pattern baldness have actually evolved in the human species to compensate for the growth of a beard and to achieve the requisite heat loss.

While this would have been a gradual process, it is a genuinely fascinating (if contentious) discovery which does suggest that the process of growing a beard has actively caused genetic hair loss through the ages.

Delving Beyond Science – Can you Naturally Boost Facial Hair Growth?

The latter hypothesis remains largely contested, and it remains hard to surmise whether genetic hair loss has emerged as a way of compensating for excess facial hair. We do know that male pattern baldness is an irreversible and genetically-influenced condition, and one that reflects how our bodies react when exposed to variable levels of DHT and testosterone.

The result of this is that there’s no way of preventing male pattern baldness, as even the most expensive hair replacement treatments only serve to delay the process of losing the hair around your scalp and crown.

There’s also no doubt that growing a beard compliments a bald head perfectly, so it’s far better to expend your energy by cultivating your look and naturally increasing the level of testosterone within the body. Here are some ways in which you can achieve this:

Science has provided us with some fascinating insights when it comes to hair loss, and it certainly offers an explanation as to why so many bald men grow beards.

Those with male pattern baldness are certainly predisposed to growing thick and impressive beards, while there is also ample opportunity to boost the natural levels of testosterone and DHT in your body and stimulate the growth of facial hair follicles.