Fashion
4 weeks ago
by Paul Inman
0

Whilst we wouldn’t go as far as to say that pink is the new black in male fashion, it’s certainly a hue that’s gaining tractions amongst men across the globe.

Make no mistake; a truly enlightened man no longer thinks of pink as inherently feminine colour, or one that should remain exclusive to garments with left-hand buttons and pleated hems.

Despite this, we’d wager that pink remains a significantly under-represented colour in your wardrobe, and this means that you’re missing out on a unique opportunity to modernise and diversify your outfits for all seasons. But why should you wear pink, and how can you pull this unique look off with confidence?

A History of Pink in Men’s Fashion

The reluctance of men to wear pink harks back to modern day gender stereotypes, which encourage parents to clad their young boys from head to toe in the colour blue.

However, this wasn’t always the case, as until the 20th century toddlers of either sex were typically dressed in white. In the rare instances where less neutral colours were used, it was boys who were the most likely to don pink garments.

The reason for this is simple; as pink was considered to be similar to red, and therefore a strong and bold colour that appeared distinctly masculine. This accepted logic was gradually abandoned following the Second World War, with various (albeit contested) studies suggesting that gender based colour preferences do exist and women (as opposed to men) supposedly prefer pink.

While this may have caused the idea of men in pink to become marginalised over time, it has always hovered around the fringes of male fashion.

From the pink Oxford shirt to a host of pink-tinged accessories like ties and pocket squares, it remains a vivid and typically summer hue that brightens rather than dominates a man’s wardrobe.

The tide is now turning once again, however, with notions of gender neutrality and fluidity breaking down traditional stereotypes and making pink an increasing popular colour in male fashion.

With this in mind, now is the ideal time to consider integrating pink into your wardrobe and creating a truly striking look that’s right on trend.

OK – Why Should I Wear Pink?

Of course, the fact that pink is becoming more commonplace in male fashion doesn’t mean that you should automatically start to wear it.

It’s all a matter of personal taste, although there are several reasons to consider brightening your attire with pink garments and accessories.

This certainly betrays a strong sense of self and genuine confidence, as despite the rising popularity of pink it’s still not a hue that dominates male fashion. So, by wearing this shade prominently, you can show that you’re comfortable in your own skin and happy to showcase inherently eye-catching looks.

Remember, numerous studies have also proved that women are naturally attracted to dominant and decisive men, and wearing pink undoubtedly betrays a boldness of mind and body. 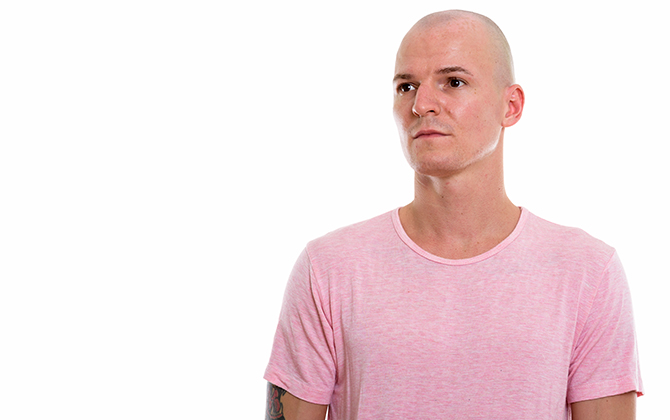 Wearing pink as a man is also strangely empowering, as it shows that a simple colour alone cannot define an individual’s masculinity. This is a relevant statement in the modern age, where our identities are increasingly complex, fluid and ultimately multifaceted.

It’s also fair to surmise that the use of pink in male fashion is about to become incredibly trendy, and getting ahead of this curve makes you a stylish trail-blazer rather than a reactive follower.

Let’s face facts; this is always a good position to be in, as every man wants to adopt a fashion forward look that helps them to stand out in a bustling crowd.

How to Choose What Tone of Pink to Wear?

Now that we’ve got you on-board, the last thing we want to do is blind you with science.

However, the fact remains that not all shades of pink have been created equal, so it’s crucial that you select the right one to suit your existing skin tone.

To achieve this as a novice, you should adhere to the general fashion rule that requires you to work in opposites. More specifically, those of you with paler skin should adopt a strong and deeper shade of pink, such as the pastel hue synonymous with the aforementioned Oxford shirt.

However, it’s also important to understand that less is definitely more when combining dark pinks with pale skin. After all, adoring too much fuchsia can genuinely drain any residual colour from your skin, leaving looking more ashen-faced than ever before.

If you’re dark or olive skinned, you should consider wearing pale pink tones that compliment this look. 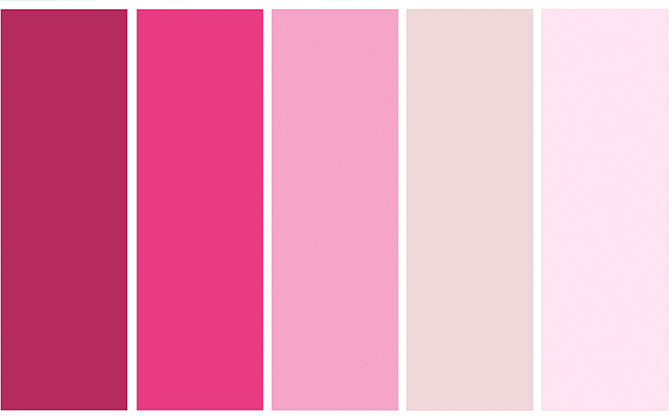 The good news here, however, is that you can afford to integrate far more pink into your outfit if you boast such a complexion, as this can provide a striking contrast that really brings your dark features.

As with anything, however, we’d recommend that you experiment with different tones while also leveraging garments and accessories to identify the ideal look.

Now it’s time to get down to the fundamentals; as we consider the key garments to consider when adding pink to your wardrobe for both casual and formal looks.

We’ll start with the ideal items of clothing for a unique summery look, and one that places pink up front and centre.

How to Wear Pink Trousers

Depending on whether it’s summer or spring, pink trousers can be breath life and excitement into the most mundane look. They definitely represent a bold fashion choice, but interestingly one that’s incredibly versatile and can be matched with a number of alternative colours. A short pink chino looks great with a crisp white shirt, for example, whilst it will compliment dashes of orange and yellow in your outfit too.

How to Wear a Pink Jumper

If you’re looking to wear pink during the colder weather seasons, a jumper represents the best possible fashion choice. This affords you the chance to combine various hues of pink according to your skin tone, creating various points of difference that create versatile looks. The key is to combine with this relatively subdued tones to balance out your look where possible, with black or white jeans providing an appealing but striking contrast. 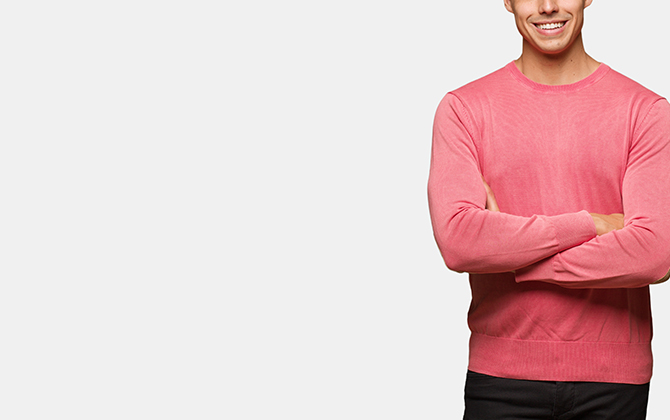 How to Wear Pink T-Shirts

We clothes with T-shirts, which are the staple of any casual look that yearns to incorporate pink. Make no-mistake; a pale pink T-shirt will also work with a multitude of colours and precise looks, with the combination of soft pink and raw denim fast earning cult status in the realm of male fashion. Top this look off with denim boots for the most impressive visual effect, with this look ideal as spring gives way to the burning heat of summer.

What About Pink in Formal Attire – The Main Considerations

However, there are several garments that provide the ideal conduit for the colour pink, including the following!

How to Wear a Pink Shirt

We’ve already spoken about the iconic Oxford shirt, which boasts a subtle and light pink tone that has been preferred by men for years. This definitely contributes to a smart but striking formal look, particularly when combined with navy blue and light grey suits. This type of shirt will also compliment a classic black suit and create an almost timeless look, and one that will become commonplace over the course of the next few years.

How to Wear a Pink Tie

We can’t talk about formal looks and shirts without also considering ties, which provide a unique opportunity to inject some pink into your workplace attire. Light, salmon and fuchsia pink ties are particularly versatile, as once again they can be combined with black, navy blue and tonal shirt to create a look that’s both stylish and masculine in equal measure. This type of look is also great for a summer wedding, although if you’re the groom you probably won’t get much of a say about what you wear!

How to Wear a Pink Blazer or Jacket

A blazer or suit jacket tops off any formal look, while acting as a statement garment that can make or break your outfit. So, the most confident men amongst you may want to wear a pink blazer, which also enables you to don a fairly simplistic and classic selection of garments and colours underneath. You can also don a formal tonal look underneath your pale or bright pink blazer, while this also work well with a black shirt or trousers during the autumn months. 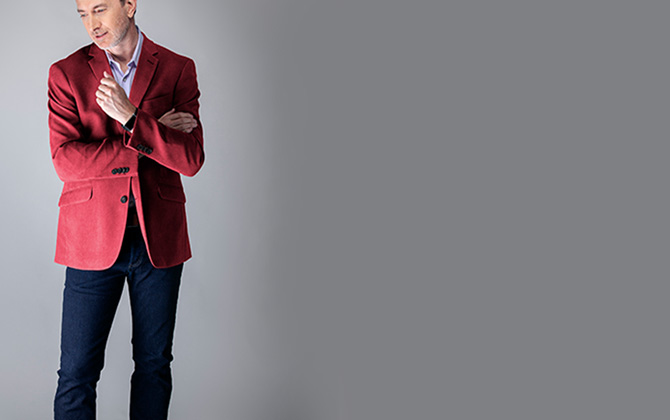 The Last Word – Is Pink the New Blue?

We said at the beginning of this peace that pink definitely isn’t the new black, but could it be described as a brand new iteration of blue?

This is at least arguable, as pink is becoming increasingly commonplace in male fashion and this trend is likely to gather even more momentum in the months ahead.

By following our guide, you can begin to understand the benefits of wearing pink and the various ways in which you can cultivate your own unique look, depending on your skin tone and each specific occasion!