Style is a word that remains synonymous with Manchester City manager Pep Guardiola, and it has done ever since the former midfielder made his debut in Johan Cruyff’s so-called dream team in 1990.

Characterised by his simplistic but aesthetically pleasing style of play, Pep won a staggering 16 major honours as a Barcelona player, before lifting a further 14 trophies as manager of the Catalan side in four startling years between 2008 and 2012.

This unique combination of style and success is also something that defines Guardiola’s fashion sense, while it has also helped him to become the single most trend-conscious manager in the English game since joining Manchester City.

A true style icon with a fashion sense that is as simplistic as it is iconic, Pep’s effortless range of looks have raised the appearance stakes at Premier League grounds up and down the country.

50 Shades of Grey: The Smart Guardiola

Every style icon has a trademark look, and Guardiola is no exception to this rule.

Whenever you picture the dashing Spaniard hugging the touchline in big games, you think of the slim-cut dark suit, the skinny tie and the narrow V-neck jumper that brings colour, life and another dimension to an otherwise staple outfit.

Evidently, Pep is a fan of the classic black or grey suit, although he does wear variable shades of the colours.

He also favours slim-fit, plain designs over pinstripe suits, and this is typical for a man who values simplicity and maintains a relatively introverted persona.

As for the jumper, Pep prefers to stick to classic tones like black and grey as a general rule, although he is not afraid to experiment with bold and alluring colours (we will have a little more on that later). 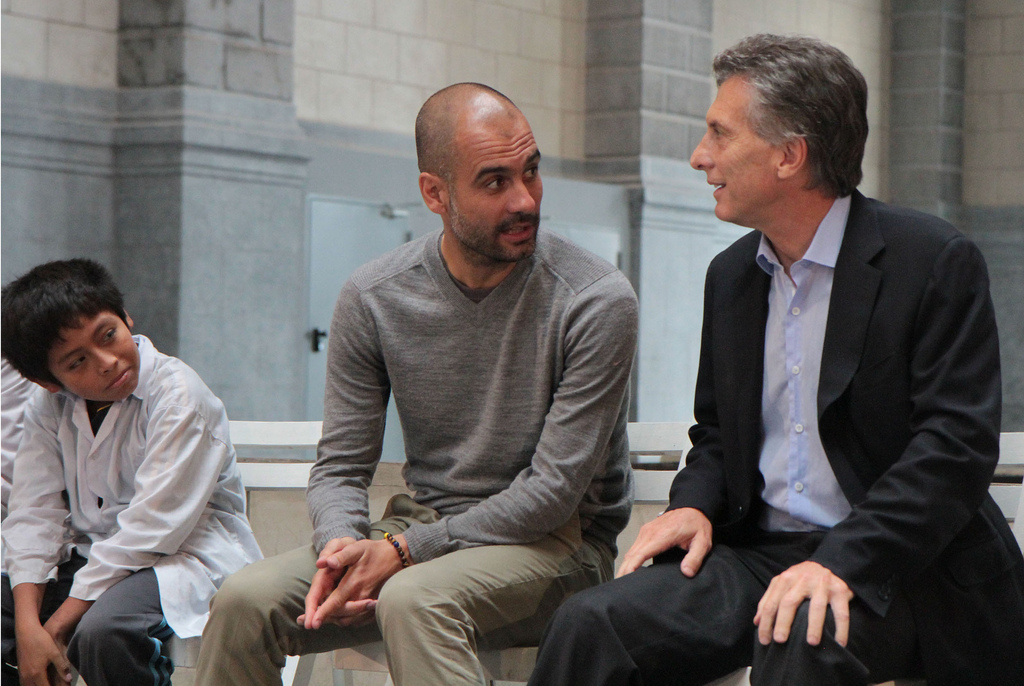 So what does this look tell us about Pep?

Well, the use of slim-fitting clothing and narrow ties creates a powerful and self-confident air, and one that helps to establish authority as a management figure.

From a style perspective, the introduction of additional layers and variable colours helps to create a more textured and defined look, and one that Pep definitely distinguishes the suave Spaniard from the crowd.

A Pep for Winter: A Love of All Things Warm (and Premium)

We imagine that Pep mourns the passing of winter, primarily because his sense of style and appreciation of alternative materials and textured looks means that he often looks at his best during the coldest months of the year.

While the slim-fitting power suit that defines Guardiola’s sense of style remains a fundamental staple during the winter months, Pep often embellishes this with woollen, three-quarter length knitted coats.

The combination of such high quality and purposeful garments only adds to the aura surrounding Guardiola, while adhering to elegant tones and the basic principles of fine tailoring.

Make no mistake; the quality of Guardiola’s wardrobe is central to the overall aesthetic and image that he is trying to convey. From slimming, knitted coats to the subtle deployment of cashmere and silk, the Spaniard utilises premium materials and items of clothing to reinforce his natural presence and sense of charisma.

This is most evident during the winter, during which time Pep elevates his trademark look with a combination of various materials and outwear.

On the Subject of Outer Wear, Pep Can Definitely Rock the Chunky Scarf

OK, we hear you ask, when exactly does Pep wear cashmere on match day?

Well, we did say that Pep used premium materials subtly but effectively within his various outfits, as this is indicative of the confident and yet understated outlook that is typical of the man.

You may have noticed the chunky cashmere scarf, for example, which Guardiola manages to wear impeccably.

Guardiola also has a penchant for large knitted scarves, which provide a stylish and complimentary accompaniment for the Spaniard’s fashion-forward look and creates a clear distinction between a manager and his players.

What About the Colourful V-Necks and Cardigans?

We have already touched loosely on Pep’s love of narrow v-necks and pullovers, but the Spaniard definitely has alternate colours for variable occasions. While his staple look clearly favours muted and sophisticated tones including beige, camel, white and light grey, for example, he has also been known to wear bright red jumpers over a classic, slim-fit white shirt and pastel tie.

A press conference favourite, this outfit perhaps reflects a little more of Pep’s playful personality, and offers an insight into the man that exists outside of the footballing world.

The same principle applies to the classic button cardigan, which Pep often wears over the trademark shirt and tie.

Once again, the Spaniard utilises subtle but elegant shades to vary his look, without straying too far from the simplicity that makes Guardiola’s style so accessible.

This type of cardigan has always been a staple for managers and senior figures, primary because it is a layered accessory that evolves (and in some instances softens) a powerful and authoritative look.

For those of you who have seen David Moyes in a cardigan and remain unconvinced, let’s just remember that it Pep’s charisma, presence and overall physique make him far better suited to pull off such a look!

Casual Pep: A Look That Only Guardiola Could Pull-off

For those of you who are avid watchers of the EPL, you will probably have observed Guardiola’s choice of outfits with interest this season.

If this is the case, you will have noticed that the Spaniard’s look has embraced elements of casual wear, which is easy to do when you have an effortless and understated sense of style.

In the Champions League clash with Celtic, for example, Pep stunned some onlookers by wearing gleaming converse, skinny jeans, a bold polo-neck sweater and a wool overcoat on the touchline.

This fusion of formal and casual garments created a truly avant-garde look, and one that highlighted Pep’s uninhibited approach to fashion and creating outfits.

This look also offers a unique insight into Pep’s casual style, which is usually only ever seen during pre-season and away from the training ground.

Understated converse trainers are a key staple of this, along with slim chinos and polo shirts.

Once again, the use of colours is largely muted, although Pep often introduces bold colours such as red and orange in the form of eye-catching, vintage-esque t-shirts.

The 3 Secrets to Replicating Pep’s Look

While Pep’s physique and innate understanding of style affords him a natural advantage in the fashion stakes, the beauty of his look is that there are several underlying rules that make it attainable to the masses.

The most important of these is that Pep maintains a staple look that is defined by premium materials, slim-fit clothing and the deployment of muted colours.

By adhering to this and looking to introduce colour in the form of accessories or single garments such as v-necks and t-shirts, you can create an effortless sense of style that pays homage to one of the most fashion-forward men in football.