The notion of going bald is no longer the pressing concern that it once was for young men, and this is largely down to a greater understanding of the process.

While the majority of males begin to see their hairline recede in their twenties, it usually takes between 15 and 25 years to become completely bald.

During this time, men are afforded an opportunity to embrace their gradual hair loss and cultivate a look that either subtly disguises or enhances their receding hairline.

The key to this is your choice of hairstyle, as shaving your head is not the only way of embracing baldness in the modern age. Here are seven distinct styles that will help you achieve a similar objective:

1. The Modern Comb-over With Temple Fade

While the traditional comb-over may be a source of much mirth, the modern alternative is far more stylish and pleasing on the eye. Not only this, but the modern comb-over is one of the easiest styles to achieve for balding men, as it is versatile and allows you to fill out areas where the hairline is receding. 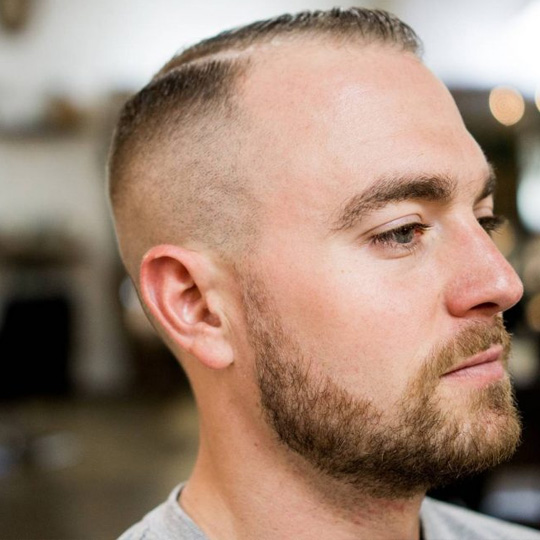 This look is also augmented by faded temples and sides, as this creates a cropped style which is clean, neat and balanced. You can also use trimmed facial hair to compliment the aesthetic, as this helps to draw focus away from your hairline and adds to the contemporary appeal of the cut.

If you wish to achieve a slightly younger look while also embracing your receding hairline, you will need to consider a spiked, slightly messy cut. This will create a fashionable style that is right in trend, while it is also a versatile cut that works at variable lengths.

This cut also features slightly faded sides that are blended at the crown, while the hair on the top is longer and chopped into to create the ruffled effect. This can then be brushed forward in short spikes, which are then held in place with texturizing cream and a light-hold hairspray.

Make no mistake; this is a manageable and stylish cut that looks great and helps you to maintain an effortlessly youthful visage.

This cut works on a simple premise, while it also reflects the fact that shorter, tighter styles are ideally-suited to men with a receding hairline. 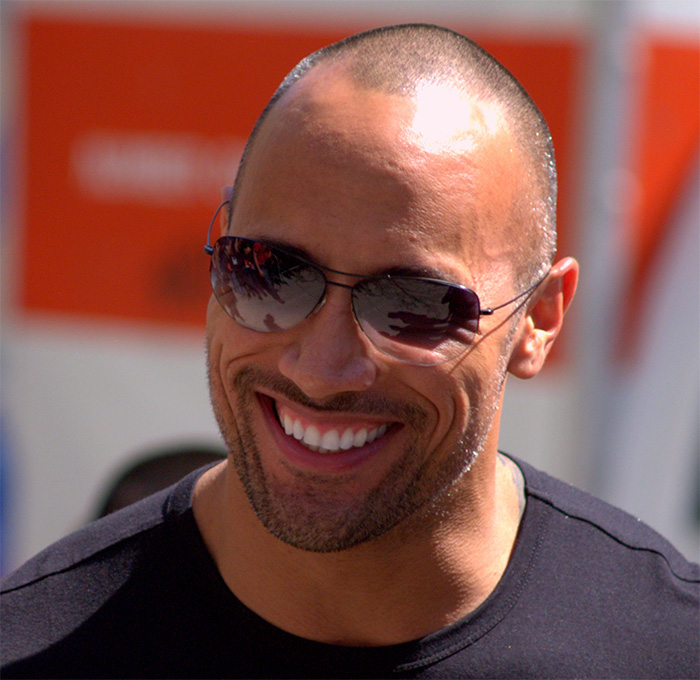 This cut creates an even and cropped style that can blend receding hairlines. As celebrity stylist Thom Priano says, the buzz cut is effective because ‘you can barely see the hair’, while it is also a quick and simple cut that can be easily maintained at home.

Not only this, but the balanced nature of the buzz cut blends thinner areas at the front and back of the head, while subtle changes in length can also suit varying degrees of baldness.

If you do adopt this look, be sure to take care of your scalp. Constant shaving or clipping can irritate your skin, so use a moisturiser to prevent any issues.

There are exceptions to every rule, including the idea that short, high and tight cuts represent the best choice for balding men. Breaking this trend is the mop top, which is a popular and street-smart style that works particularly well for males with longer hair that has suddenly begun to thin. 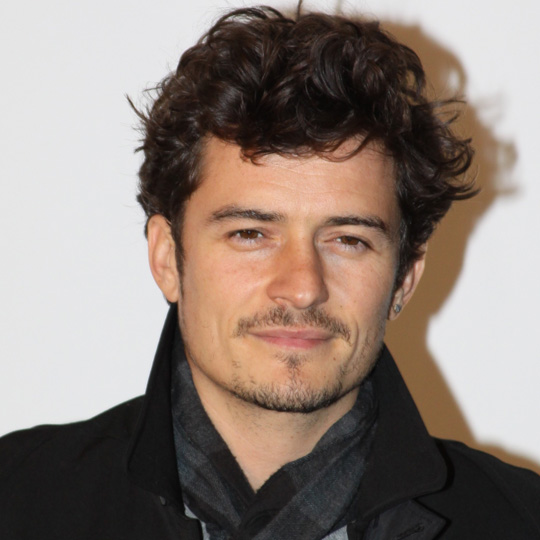 The premise behind this is relatively simple, with Acord confirming that an excess of longer, slightly unruly hair will create a busier look that indicates fullness and greater volume.

This certainly works too, although as usual much will depend on your execution if you are achieve your style goals.

More specifically, you will need to pay attention while styling your hair, while it also need to be blow-dried after washing. You can also use a small amount of moulding paste to the ends of your hair, as this helps to promote a thicker aesthetic while allowing for more controlled movement.

The barista is an interesting cut, and one that has evolved from the modern comb-over we covered earlier. In essence, it is a comb-over for hipsters, and one that is particularly adept at blending thin areas of hair around the crown. 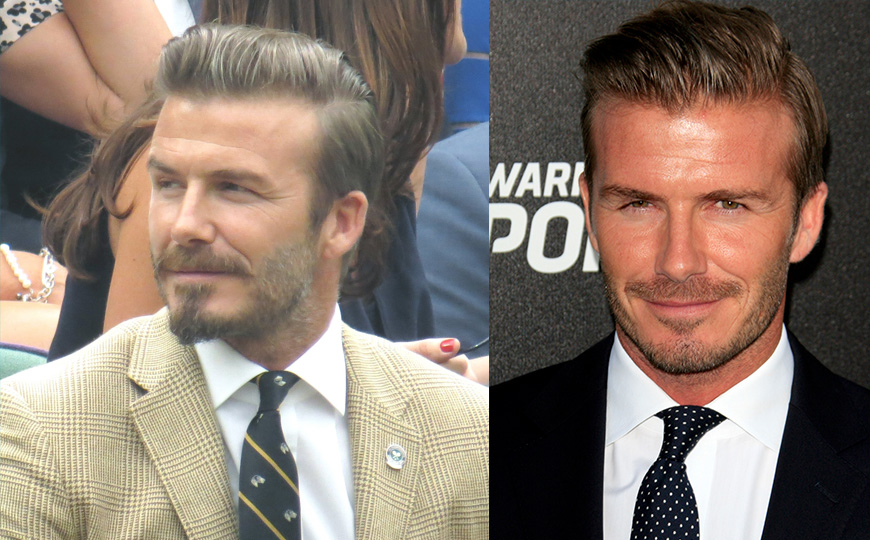 Of course, a man-bun serves a similar purpose, but unless you happen to be Zlatan Ibrahimovic, it is tough to successfully pull-off such a look.

The barista therefore offers a happy compromise, with a tight crop at the sides and slightly longer hair swept back at the top.

It is both effective and fashion-forward, although it is wise to use a water-soluble hair product that can maintain the style without weighing it down.

Just remember, this cut also enables you to avoid the man-bun, which for most should come as a blessed relief!

6. The Short Mohawk With Shaved Sides

If you are a fan of extremes, you will love this next cut. The short mohawk and a clean and striking cut that tends to suit stronger jaw-lines, while it has has the capacity to drive attention away from any areas of receding hair. 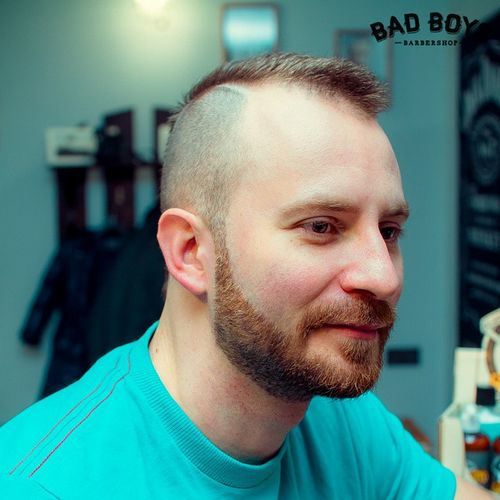 A true example of embracing baldness with genuine gusto, the short mohawk features shaved sides and a subtle, cropped mohawk on top. It is also complimented well by a close, trimmed beard, which embellishes your jaw line and creates an underlying sense of masculinity.

In effect, this is a bold and courageous cut that transforms a receding hairline into pat of a deliberate style. It is also increasingly fashionable at present, while it is ideal for younger men you have begun to lose their hair.

We close with a cut that is genuinely sexy, and one that provides a sleeker but no less appealing alternative to the classic shaved head. 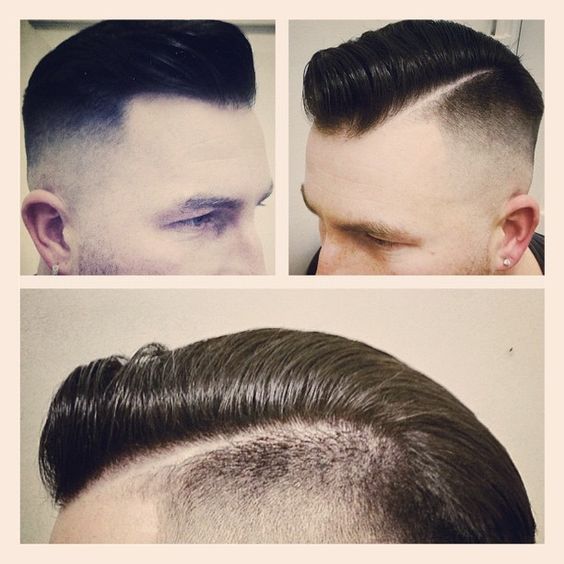 Featuring a clean side-parting and a slicked-back quiff, it allows you to retain longer hair on top and seamlessly blend a receding hairline. When combined with faded temples, it also creates a fashion-forward look that can also be further enhanced by an Ivy League sense of style.

This look typically works well with a cropped beard, but this is certainly now prerequisite.

This diverse look also lets you experiment with the length of the hair around the crown, while you can adapt the style as your hair thins further.

A Style for Every Need

In the U.S. alone, an estimated 35 million men are experiencing some form of hair loss.

This does not represent the same issue that it used to, as there are now a number of stylish and fashion-forward looks that can help to subtly blend receding hairlines and incorporate them as part of deliberately cultivated styles.