As a general rule, anyone who is invited to host the GQ Men of the Year Award has a truly exceptional sense of style.

This was certainly the case last year, when popular New York actor and director Stanley Tucci was rewarded with the prestigious honour. The 57-year old, who has been nominated for an Academy award and won two Emmys during a stellar career, is definitely renowned for his fashion sense and cutting a dashing figure wherever he goes.

The fact that Tucci hired a Hugo Boss evening suit for the occasion tells you everything that you need to know about the debonair American, who sense of style is only matched by his presence and immaculate timing on-screen. He certainly cut quite a figure in his tailored, steel blue three-piece, but there are many layers to Tucci’s unique fashion sense and innate understanding of how to construct outfits.

The Staple Tucci Look: An Exercise in Classic Formal Wear

If you want to understand the staple Tucci outfit, look no further than the actor’s trip to the Berlin Film Festival in February. Tucci, who was in Germany to see the premier of his highly-anticipated film Final Portrait and arrived with his wife Felicity Blunt, sported a classic, three-piece suit with narrow tie, slim trousers and smart shoes.

Not only was the suit impeccably tailored, but it’s striking shade of black also created an imposing and powerful aesthetic.

This underlines Tucci’s fashion sense in a nutshell; as the actor prefers slim-fit, three-piece suits in black, light grey and navy blue. 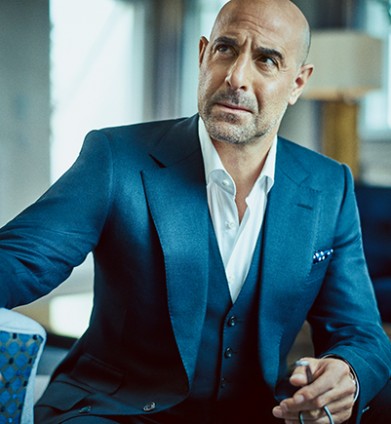 He is also not afraid to embolden this classic look with colourful ties, from crimson red to deep purple and brown.

Occasionally, Tucci will adapt his smart look by introducing pinstripe and check suits, but they are always three-piece in their nature and adhere to the classic principles of fine tailoring. He almost always augments this look with a crisp, white shirt too, and Tucci’s formal wear harks back to the halcyon style eras of the 1950s and 1960.

In short, Tucci adheres to classic shapes and layers while maintaining an open mind with regards to materials, accessories and colours. Another core example of this is his iconic combination of classic bow tie and tartan trousers, which worked seamlessly with a fitted velvet jacket and a white shirt.

The Smart Casual Tucci: A Unique Meld of Traditional and Contemporary Styles

It makes sense that Tucci should adhere so faithfully to a classic style template, as he grew up during the 1960s and has clearly been heavily influenced by the era.

Close your eyes, and you picture him in the role of Don Draper in Mad Men, and this highlights the defined sense of formal style that the actor possesses. 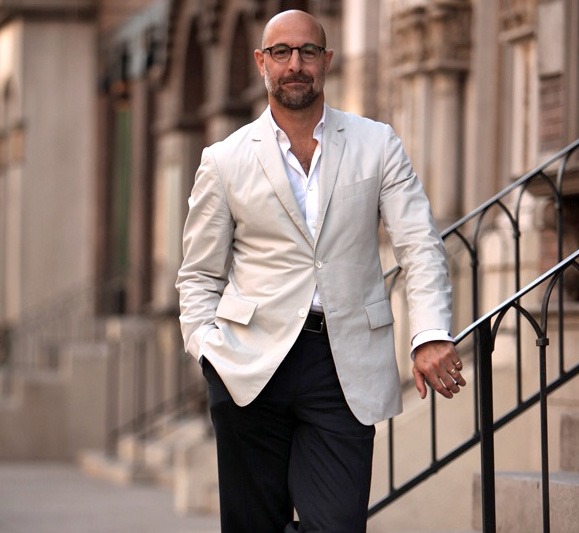 Tucci is a little more experimental when it comes to his smart casual attire, however, which perhaps reflects a little of the playful and genial personality that radiates from him. Perhaps the quintessential smart casual look for Tucci consists of a slim-fit navy blazer and an open-neck white shirt, which is augmented by a dark brown belt and beige chinos. 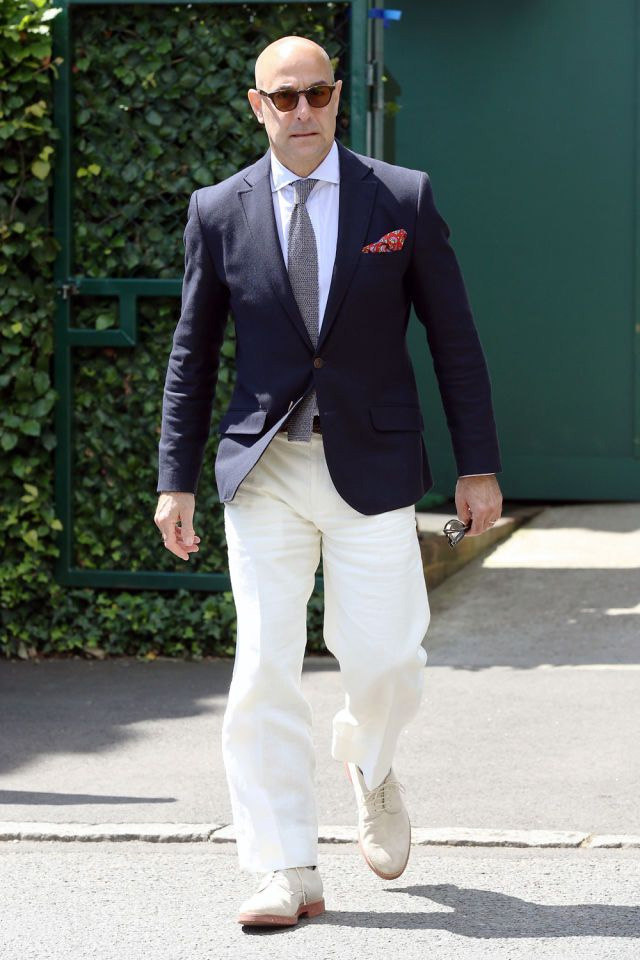 The use of colour is a little more varied here, which ensures a contemporary and decidedly layered look.

He will also alternate this look on occasion, preferring darker chinos along with an ice-white shirt and a cream coloured blazer. There is a clear theme in Tucci’s smart casual ethos, but one that enables the actor to experiment with variable colours and materials while maintaining a core aesthetic.

As if to support this, Tucci will often add stand-out accessories to add a new dimension to an otherwise traditional look. He may combine black and white striped scarf with a classic black blazer, for example, embellishing a distinctly classic look with a bold and modern twist.

Outwear and Accessories: A Man With Simple But Premium Tastes

If you look at most modern style icons, they tend to drive simplistic and classic looks with premium materials. This certainly applies to Tucci, who will often favour silk ties and cashmere scarves as a way of sustaining a high quality and almost timeless aesthetic.

He is an avid wearer of single breasted, knitted wool coats, for example, which are usually slim fit and worn in either black or a similarly dark shade.

During the warmer months, Tucci may opt for a slightly cooler but no less stylish classic fit woollen blazer. Worn in variable shades of grey, this makes for a statement piece of outwear that allows for a flexible and relaxed months in the summer.

The Casual Tucci: A Penchant for Muted Colours and Zip-up Cardigans

Given Tucci’s classic style influences, it should come as no surprise that he even looks incredibly smart even when he is dressing casually.

His casual look is also unsurprisingly layered and typically well-tailored, combining everything from chinos, slim-fit jeans and woollen trousers. He also often wears a simple, vintage t-shirt design underneath a dual-zip cardigan or a cable-knit sweater, with an emphasis placed on slim-fit garments that can incorporate various colours and materials as required.

Tucci’s t-shirt range also offers a unique insight into the man; as he tends to combine classic styles and neutral tones with striking prints and imagery. Here, the contrast between traditional and classic is palpable, and this remains a key theme that runs throughout the actors wardrobe.

You will also see a wider range of colours in Tucci’s casual wear, from muted such as beige and camel to pastel shades such as light blue. This is indicative of a man who is comfortable with his look, as he is confident wearing black and grey as he is donning softer hues and shades.

So there you have it; a basic style guide for Stanley Tucci. While it may be tempting to categorise his fashion sense as being classical, this does not do justice to the subtle ways in which Tucci integrated contemporary fashion elements to reinvent looks for the modern age. This is perhaps the biggest compliment that we can pay the man, as he is a true icon for anyone who wishes to replicate a traditional look for the modern age.