It’s important to treat the top of your head like you would your face, it’s the same skin after-all.

Protection is not just for the ladies and their SPF 50+, umbrellas and sun hats, it’s for you too. Yes, we are all told to apply sunscreen from an early age but some of you out there seem to ignore this the older you get – like you’ve become invincible to the sun’s rays – well my friend you’re not.

Bald men need to apply and then re-apply sunscreen, especially if you’re fair-skinned and newly shaved. If you think one coat is enough then think again, your head is pointing right up to the sun and is just a potential skin disaster waiting to happen!

I’ll give you 3 good reasons why looking after your head as well as your face can hopefully try and prevent or reduce the damage the sun is going to do – you want that head looking it’s best for years to come don’t you?

#1 – It helps to prevent skin cancer

Yes, your head is probably more susceptible to getting skin cancer than your face. All the usual advice matters here, don’t ignore it. Sitting in the sun all day with just your sunglasses on, a beer in hand and a small amount of sunscreen on your face is not going to prevent anything (other than a bright red bald head)! Apply the highest factor you have to the top of your head, 50+ if you have it. OK if it’s the sun-kissed look you’re after then that’s cool, just do it gradually and once you’ve had enough, cover up with a hat, sit in the shade or retreat to the bar! 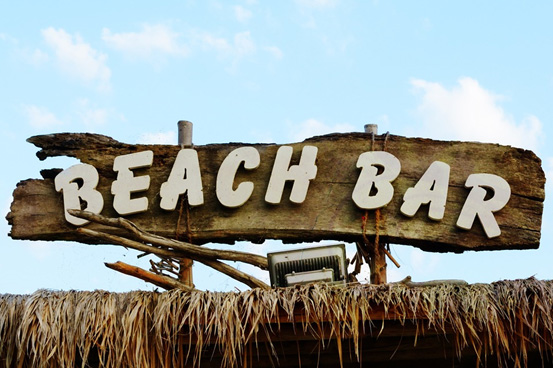 If you think that the skin is thicker on the top of your head than on your face, then you’d be wrong. The skin is actually stretched thinner over your head, it’s more susceptible to burning as you probably don’t realise it’s in the sun all the time, especially if you’re not wearing a hat.

It’s easy to end up burning your head and trust me, it’s not pleasant – the burning lasts for days and you end up looking like a real idiot – if you didn’t want to bring attention to your bald head you certainly will if you burn it!

Gents, if you don’t want to end up looking like you’ve got skin like and Armadillo on top make sure you protect your head in the summer sun, don’t let it dry out, don’t let it burn and always apply moisturiser/after sun when you’ve finished catching rays. 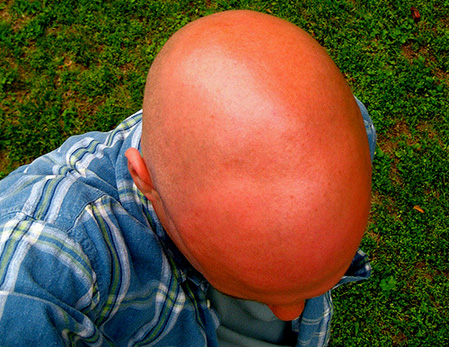 If like me you’ve reached an age where you’ve made quite a few mistakes and hopefully learned from them, burning your bald head is not a mistake you do again and again.

I’ve made the mistake a couple of times – at an early age and drinking in the sun! Getting over the initial burning, redness and glow was bad enough but nothing compared to the snowstorm that follows.

Those of you who been here before know what I mean, for the rest of you, well I hope you don’t burn your head. Basically, your head will start to peel and it ends up looking like giant dandruff flakes – attractive, NOT! Now, this doesn’t just last a day, it lasts for days until your head develops a new layer of skin – before this, you look like a snake shedding its skin and everyone notices, it’s not just a peeling nose!

If this last piece of advice is not enough to make you think twice about using sun screen then sorry, move to Africa, develop a taste for beetles and become an Armadillo!