There’s no doubt about it; social media has caused a significant social shift in terms of our priorities and the emphasis that we give to our appearance.

After all, during the 1940s people were largely preoccupied with their status and reputation, whereas more recent generations are obsessed with their appearance and the image that they project to others.

With this in mind, it’s little wonder that the modern man wants to make the most of their appearance, with dress shoes now an essential component of any versatile wardrobe. But what exactly is a dress shoe, and which iterations of this classic footwear should you look to own?

What is a Dress Shoe?

Before we delve into the most popular types of dress shoe on the market, we need to understand the components that make up this footwear.

From front to back, a dress shoe consists of four parts; namely the toe, vamp, facing and quarter. When comparing the market, it’s the placement and construction of these elements that determine the quality and individuality of a dress shoe, whilst they also impact on the design and overall appearance.

This distinction is important, as you may want to select different dress shoes depending on whether you’re attending a formal event or one that demands smart-casual attire.

In this respect, the range of dress shoes available may be surprising to some, and there’s certainly plenty of choices when you hit the shops. Below, we’ve listed the best and most popular types of dress shoes and asked why they’re so appealing.

We start with the Oxford, which is the most simplistic and timeless type of dress shoes and represent an excellent starting point for your wardrobe.

A staple of male fashion since it gained popularity amongst college students in the 1800s, the Oxford is popular due to its versatility and the fact that it can be dressed up or down for both formal and daily wear. 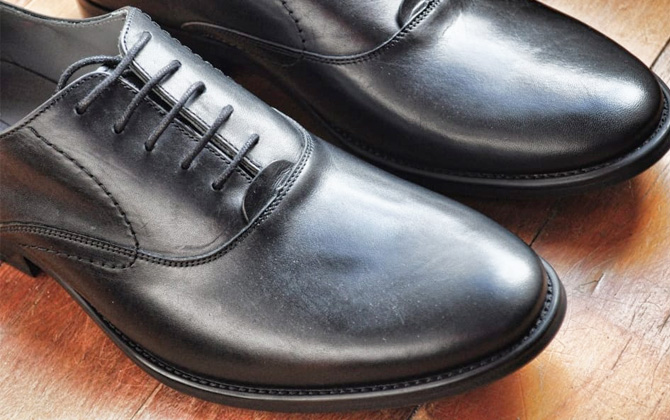 The most recognisable and iconic trait of an Oxford shoe is its closed lacing, which lends itself to an inherent form design where a slim and eye-catching silhouette closely hugs the contour of the foot.

Oxford dress shoes also come in a wide array of colours, from brown, blue, red and green for daily wear to English tan and black leather for more formal events and work attire.

You’ll also find Oxford shoes made in leather and suede, so you can rest assured that there’s a material to help you complement your overall outfit!

Our next selection is the one-piece Oxford, which is a variation on the classic Oxford dress shoe and became increasingly popular throughout the 20th century.

OK, we hear you ask, but what separates the one-piece Oxford from the classic iteration of the dress shoe? 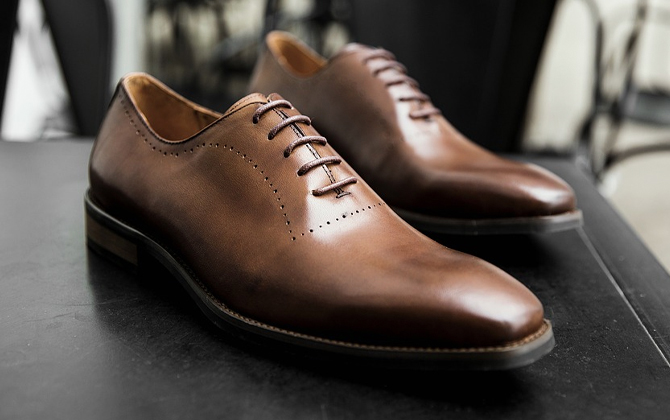 In simple terms, this unique dress shoe is constructed using a single piece of leather, rather than a number of alternatively cut pieces that are subsequently sewn together. As a result, it also has a single seam, creating an undeniably sleek and elegant look that elevated the classic Oxford onto a more stylistic level.

Typically, one-piece Oxford dress shoes are worn at formal events, rather than adorning work or everyday attire. You may also find these shoes available in a smaller selection of colours, so this is a key consideration when hitting the market as a shopper!

In some ways, you could also that the Derby is another type of dress shoe that has borrowed heavily from the Oxford.

There are certainly similarities between these two items of footwear, although the primary difference is that the Derby serves as a more casual dress shoe that’s ideal for everyday wear.

The Derby shoe (which is also known as either the Gibson or the blucher) first entered the market after the Oxford in 1850, and by the turn of the 20th century, they’d evolved into the preferred casual footwear for a night out on the town.

If you’re new to the dress shoe market, it may be a little difficult to distinguish between Derbies and Oxfords. This is because both of these shoes are similar in their shape and design, but a Derby dress shoe can usually be identified by the fact that its facing is attached directly to the top of the vamp.

This creates a comfortable, open laced dress shoe that boasts a wider fit that’s ideal for longer periods of wear.

Next up is the first laceless dress shoe on our list and one that has had quite an impact on the market since it first emerged towards the end of the 19th century.

The Monk Strap dress shoe also plays an important role in the marketplace, as it’s more formal than the Derby but boasts a little more versatility than the Oxford. 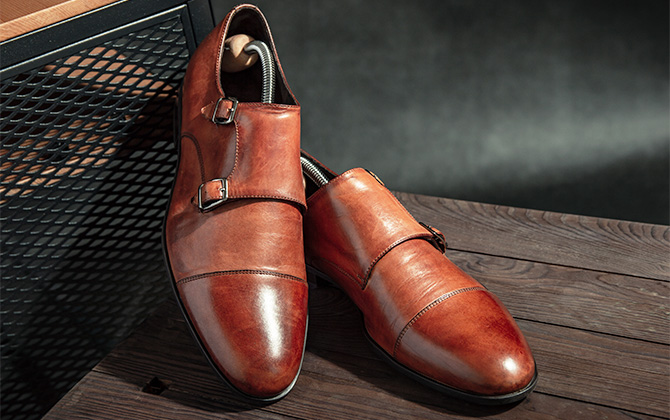 Interestingly, this shoe takes its name from the monks who originally donned them, whilst this unique history also explains the simple, closed-toe design that allows for a wider fit whilst providing greater protection than traditional sandals.

Like most dress shoes, the Monk Strap boasts a similar shape and construction to the Oxford, but instead of an eyelet closure, it has a wide swathe of leather that fastens across the front.

This wide strap is fastened with either a single or a double-buckle closure, whilst the shoe itself can be manufactured from either leather or suede.

Ultimately, the unique design and relatively wide fit of this shoe lends itself to incredibly versatile footwear, which can be worn with everything from three-piece suits to cuffed and boot-cut jeans.

Next up is one of the world’s most iconic dress shoes, which is known colloquially as ‘the loafer’.

In simple terms, this is a moccasin-inspired shoe that boasts a unique slip-on style, whilst the original interaction of this software was famously worn as a casual house-slipper for King George VI.

This incredibly comfortable and wide-fit shoe first gained widespread popularity Stateside in the 1930s, and by the 60s’ businessmen and marketers from across the western world was wearing loafers with their three-piece suits.

No dress shoe has evolved as much as the loafer over the course of the last 100 years, which explains why this footwear is able to combine a comfortable and wide fit with an effortless sense of style.

You certainly shouldn’t have any difficulty identifying loafers, as most feature a single, elevated seam that runs along the toe.

In today’s market, there’s now a wide array of loafers available to customers, from more structured and formal dress shoes to softer, moccasin designs that are commonly used for driving.

We close with something completely different, with the dress boot offering a stylish and contemporary option for modern men in search of formal footwear.

The dress boot is a short, lace-up boot, and one that has been constructed like an Oxford shoe (although it has a noticeably longer shaft).

This shoes / boots roots can be traced back to the Victorian era when men have limited footwear options in terms of style and range. This explains why the dress boot became so popular in a relatively short period of time, whilst even today’s customers continue to flock in search of this eye-catching footwear.

In addition to the longer shaft, the dress boot can also be distinguished from the Oxford shoe by its short lace-up style and (in some instances) the presence of wingtip brogueing along the seams.

In truth, dress shoes can be worn to suit a range of different outfits, depending on the precise make that you invest in.

Sleek dress boots with thinner laces are ideal for a more formal look, for example, whereas footwear made of fine leather is particularly compatible with a three-piece suit.

We’ve listed six of the most iconic and popular dress shoes here, although there are others that contribute to an increasingly accessible and versatile market.

With this wide range of choice in mind, it’s important you compare the market before making an informed decision, whilst also considering the unique composition of each individual dress shoe.

You also need to have a detailed understanding of what you’re looking for in a dress shoe, as each design is unique and tailored to suit a different purpose.