Even in the modern age, the concept of male pattern baldness and premature hair loss remains the subject of numerous misconceptions and half-truths.

This is part of the reason why so many men initially struggle when they begin to lose their hair, as they struggle to find accurate information to help them understand the issue and manage their expectations.

Even the fundamental cause of male pattern baldness remains a source of confusion for some, with many people misunderstanding the function of the Dihydrotestosterone (DHT) hormone and the role that it plays in triggering sustained hair loss.

Hopefully, we’ll clear up some of this confusion below, by exploring DHT in closer detail and asking how it impacts on our hair follicles over time.

Covering the Bases – What Exactly is DHT?

Before we delve deep into the core scientific attributes of DHT, we need to understand its precise definition in simple terms.

Essentially, DHT is a natural but powerful metabolite that exists within the human body and is considered to be a chemical derivative of testosterone.

In general terms, it helps to give men their male characteristics and attributes, and is created when the metabolism of androgen melds with an enzyme referred to as ‘5-alpha-reductase’.

At this point, DHT is formed primarily in the testes and prostate gland, along with the adrenal glands and, most pointedly, the hair follicles. This is where we can begin to trace the intriguing relationship between DHT and hair loss, as we consider how it contributes to male pattern baldness.

Let’s Delve a Little Deeper – What Exactly is the Purpose of DHT?

OK, we hear you ask, if DHT can contribute to premature hair loss and male pattern baldness, why exactly does it exist?

Well, although DHT (or more specifically our response this hormone) has been proven to trigger a number of negative effects in adult life, it also plays an important and positive role in several bodily functions and processes. 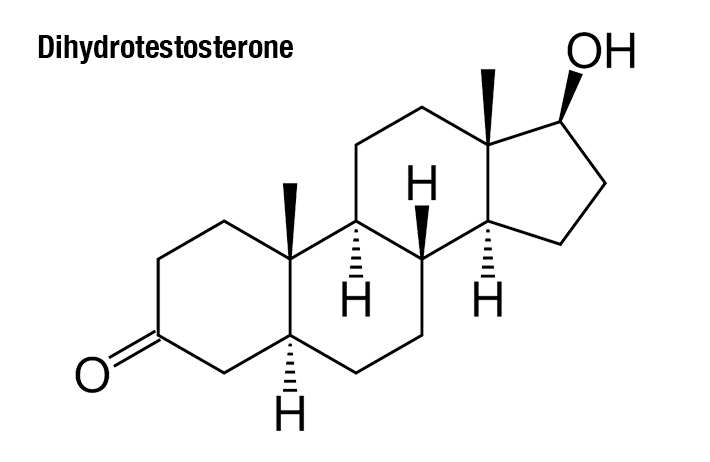 Most importantly, DHT is essential to the development of inherently male characteristics during puberty, including the growth of facial hair, muscle growth and the deepening of the voice. It’s also pivotal to the healthy development of the penis and prostate, and in this respect it remains one of the most seminal sex hormones in the human body.

DHT also impacts on skin growth and development during adolescence, so it’s difficult to understate it importance from a purely physical perspective.

This core functionality also highlights how DHT works alongside testosterone, which plays a pivotal role in underpinning normal sexual behaviour as boys grow into young men. It also helps to build protein and organically regulate metabolic activities, such as the production of blood cells and bone formation.

So far, so good, but this is where the purpose of DHT and its impact on the human body becomes a little confusing and contradictory.

As we’ve already said, the precise way in which we respond to DHT can have negative effects in later life and once men are fully grown. It’s thought to play a causative role in the formation of adult acne, for example, while it may also trigger the enlargement of the prostate and exacerbate the process of androgenetic alopecia (or male pattern baldness to you and me).

So, in an inescapable twist of irony, the same hormone that causes us to grow facial hair during our adolescence can also contribute to premature baldness in later life.

Now for the Real Science – How Does DHT Really Cause Hair Loss?

This is where the relationship between DHT and hair loss can become really confusing, so we recommend that you get comfortable as we attempt to explain this in detail and debunk the numerous myths that surround male pattern baldness. 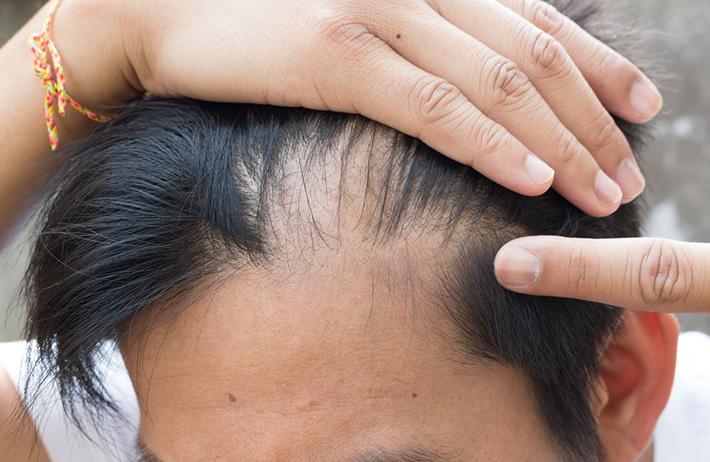 We’ll start by addressing the primary misconception, which is that male pattern baldness occurs as a result of producing too much testosterone within the body.

Many people jump to this conclusion as the levels of DHT are typically elevated in those who begin to see their hair thin, and while this is understandable it represents a complete misunderstanding of the role that this hormone plays in triggering premature baldness and its relationship with testosterone .

Despite the increased levels of DHT that are present in individuals who have begun to experience the symptoms of male pattern baldness, for example, studies have shown that this bears little or no relation to the production of testosterone.

One particular study revealed that while older males tend to experience higher instances of hair loss, they simultaneously produce lower levels of testosterone.

Measuring 53 male respondents aged over 50 and a further 48 who were younger than 40, the results determined that the mean serum testosterone level in the older control group was considerably lower.

55% of this demographic also showcased obvious signs of axillary hair loss, which was considerably higher than the respondents featured in the younger control group.

With further studies also proving beyond doubt that male pattern baldness has been observed in individuals with both high and low levels of testosterone, it’s clear that the relationship between this hormone, its by-product DHT and premature hair loss is decidedly more complex.

So, what exactly is going on here? In truth, while DHT levels are typically elevated in people who begin to experience male pattern baldness (particularly at an early age), this is largely coincidental and merely a reflection of our genetic composition.

In fact, the prevailing levels of DHT within our bodies has absolutely no bearing on our rate of hair loss, so this is not the contributing factor that many people consider it to be.

In fact, male pattern baldness is dictated by the sensitivity of our hair follicles to DHT, rather than the levels of this hormone that are actually present at any given time.

More specifically, individuals whose hair follicles are genetically sensitive to DHT will lose their hair at a quicker and more pronounced rate, whereas those who are resistant will maintain a fuller head of hair for longer.

While this may explain the fundamental role that DHT plays in premature hair loss, however, the actual process behind this is deceptively complex. To begin with, a heightened sensitivity to DHT is thought to trigger the miniaturisation of the hair follicles, inhibiting their growth over a sustained period of time.

More specifically, DHT attaches itself to the receptor cells located on each follicles dermal papillas (or root). From here, it creates a form of blockage that prevents your follicles from receiving the requisite nourishment and sustenance, causing individual hairs to shrink and weaken significantly.

As a direct consequence of this, the growth ‘anagen’ stage of the hair’s life cycle is shortened, while the resting ‘telogen’ stage is significantly elongated.

This not only minimises the rate of hair growth, but it also leads to the cultivation of lighter and significantly finer hairs over time. Eventually, these hairs simply cease to grow, and at this stage the majority of the scalp will be completely bald.

Hopefully, this clear up the function of DHT and the way in which is drives premature hair loss in men. One question that remains, however, is how can DHT simultaneously contribute to scalp hair loss while also encouraging the growth of facial follicles?

The answer is refreshing simple, as DHT can effectively be broken down into two distinct categories. These include serum DHT, which circulates in your blood and has no influence of the skin.

The second categorisation is tissue DHT, which binds directly to your skin and scalp and various other locations in the human body.

As you’d expect, most studies have shown that serum DHT has no direct correlation with male pattern baldness, while others have even hinted that it may be protective again premature hair loss. 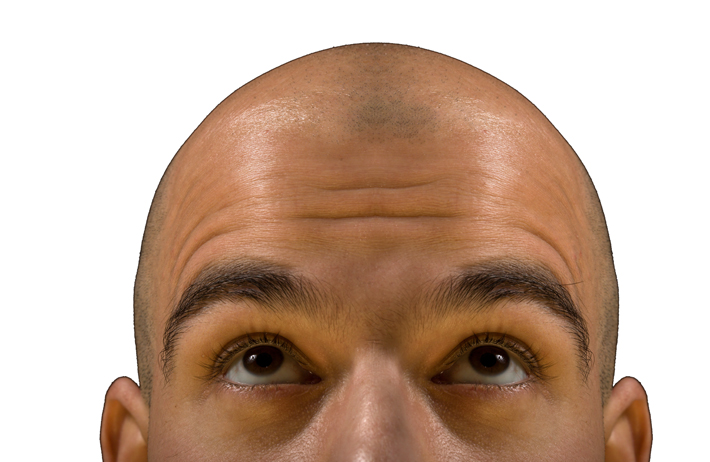 In contrast, tissue DHT levels have been found to be significantly higher in the scalps of balding men, creating a direct link between this categorisation of hormone and hair loss.

So, while there’s no distinct type of DHT that minimises or restricts the growth of facial hair in later life, there’s a clear and intrinsic link between tissue DHT and progressive hair loss on the scalp.

Male pattern baldness certainly has a distinctive shape, while the first sign of its progression is a receding front hair line. This is particularly prominent at the sides, causing the hair line to form a clear ‘M’ shape at the front of the scalp.

Then, the crown of the head (also known as the vertex) begins to experience hair loss, before these two regions merge to create a horseshoe shape on the scalp. The speed of progression can vary, while you’re unlikely to notice any signs of facial hair loss during this time.

In fact, some studies suggest that the rate of facial hair growth may even increase during this process, although this requires further scientific investigation in the future.

What About DHT Blocking – Does this Represent a Viable Solution?

Once male pattern baldness has begun to take hold, individuals must recognise that this is a natural and progressive condition that can never be fully reversed.

Still, many people pursue these so-called treatment options, particularly those who are among the 40% of males aged under 35 who experience the initial symptoms of male pattern baldness.

One option available to these individuals is the use of DHT blocking agents, which are believed to restrict the production of this hormone and serve as 5a-reductase inhibitors in both male and female patients.

This treatment option is available in the form of both synthetically produced drugs and herbal remedies. The latter group include supplements such as pumpkin seed oil, blackcurrant seed oil and even green tea, and it’s fair to surmise that these options are far safer while they do not trigger any physical side-effects. 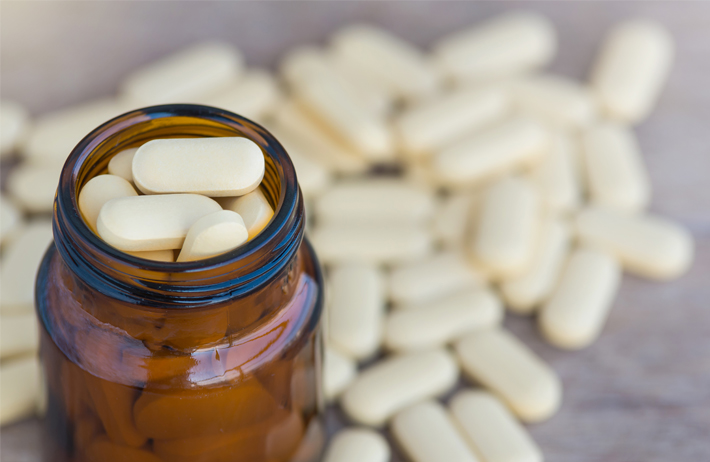 Either way, DHT blockers should be considered as reactive rather than preventative solutions, and it’s important to review every potential treatment option in detail in order to make an informed decision. Ultimately, the choice of whether or not to pursue such a treatment option is deeply persona, but one that must always be taken with the key facts in mind.

The key thing to remember is that investing in such a treatment will only serve to delay the progression of male pattern baldness, rather than halting it entirely. This arguably makes it’s a forlorn financial investment, and one that may not deliver a tangible return in most instances.

In this respect, accepting the progression of male pattern baldness may be a more proactive response, as you look to challenge your negativity and embrace a bold new aesthetic. This can be genuinely empowering, while it can also save you significant amounts of time and money.

So there you have it; our extensive and hopefully informative guide detailing the hormone behind hair loss and the often misunderstood role that it plays in male pattern baldness.

Understanding this is crucial for anyone who has begun to experience the symptoms of premature hair loss, as they look to approach the issue from a solid foundation of knowledge and insight.

This is central to the way in which you deal with male pattern baldness, and the impact that it has on your life.

Most importantly, recognising the genetic and progressive triggers of male pattern baldness create a sense of clarity, which may in turn encourage you to accept your new reality and embrace it as the potentially empowering experience that it is.