If you ever thought losing your hair was going to stop you from becoming successful, or even an actor, then think again – it seems losing it actually helps.

Take a look at the new Fast and Furious 8, The Fate of the Furious – you’re the odd guy out if you have hair in this movie franchise.

Starring, in bald order, Vin Diesel, Tyrese Gibson, Jason Statham and Dwayne ‘The Rock’ Johnson. 4 out of the 5 male actors are sporting the shaved hair look – do you need any further endorsement to reach for the razor?

As far as the action hero look goes, bald is cool, bald is badass. OK don’t get me wrong, this site is all about embracing your look, being confident in yourself and overcoming any anxiety you may have experienced.

It’s not about becoming an action hero.

Movies like these are not necessarily about who is the best actor or who is the toughest, what it does show, however, is Hollywood in not ‘baldist’.

Why? Well, because losing your hair is natural, it’s something most men go through in life and to try and negate this in Hollywood would like be casting only catwalk models, how boring would that be?

Not only would a cast of perfectly combed locks be like something out of Toni & Guy advert it would also not give the characters the ‘hardman’ persona they portray. The choice of cast was deliberate, why do you think the studio not only picked these guys and also kept them for so long?

It’s because they look tough, confident and powerful – not many of us would mess with Jason Statham or the Rock.

As far as looks go, these guys play it well and they certainly look and act the part. 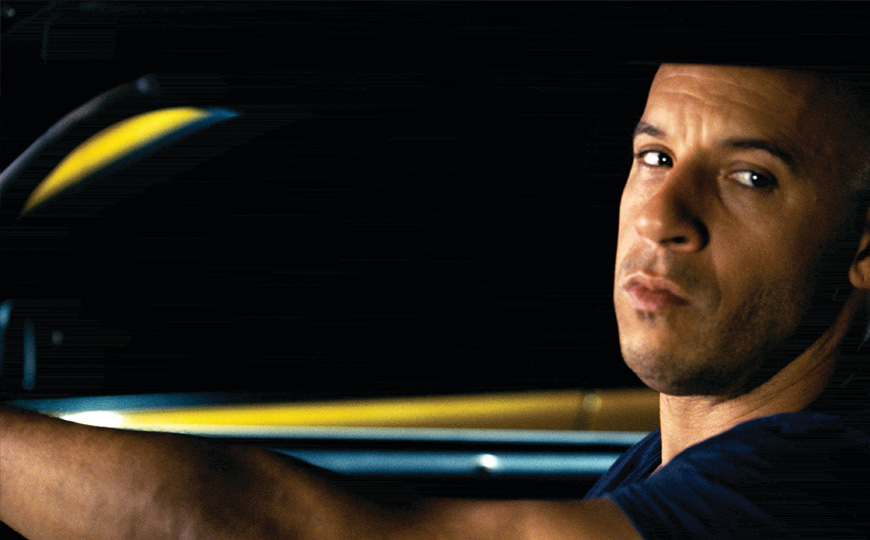 One of, if not the main character in the franchise. As always, Vin Diesel plays the hard man, perfectly!

His look, his attitude and the confidence from his on-screen persona all strengthen his role in these films. I’m not sure the same would come across if he were fashioned with a side parting or a nice pair of curtains – the bald head certainly helps his role and the character.

Although Dominic is portrayed as being the stereotypical bad guy, he has a softer, more sensitive side that is rarely shown, but if you know the movies you know it’s there.

In summary, the lead role in this movie franchise has been from the start, played by an actor who had a buzz cut and over time has shaved his head more and more.

Going bald has not stopped Vin Diesel from becoming successful or becoming one of the most famous guys in Hollywood – he is also seen as quite a sex symbol to both women and men alike. 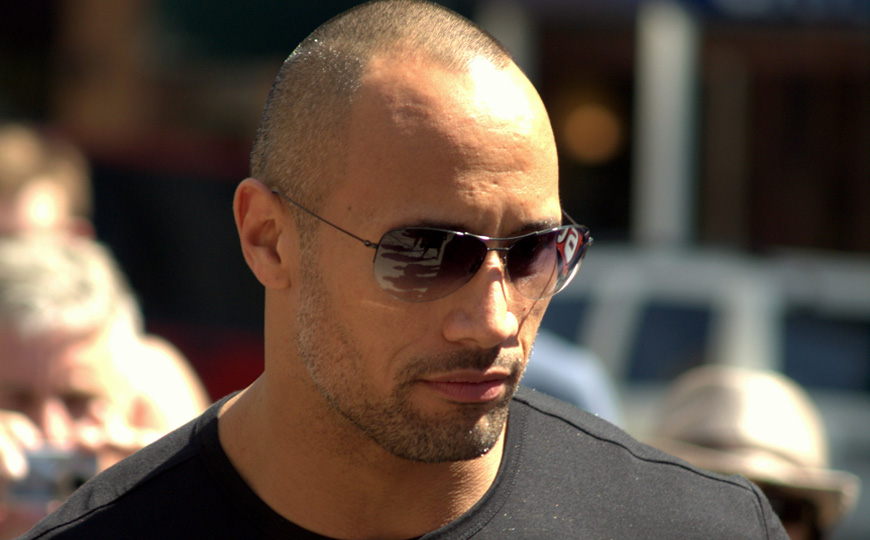 From the very start of his career as a professional wrestler, Dwayne has been a tough guy, his look and that famous eyebrow raise have catapulted his fame across the globe.

The Fast and Furious role has seen him play the part of Luke Hobbs, a good cop sent to round up the bad guys only to end up joining them.

Dwayne makes playing the though guy look easy, OK his sheer size has something to do with it but so does that perfectly shaved head and groomed goatee beard – what does it project, yes dominance, confidence and maturity, all the things needed to portray the character of Luke Hobbs. 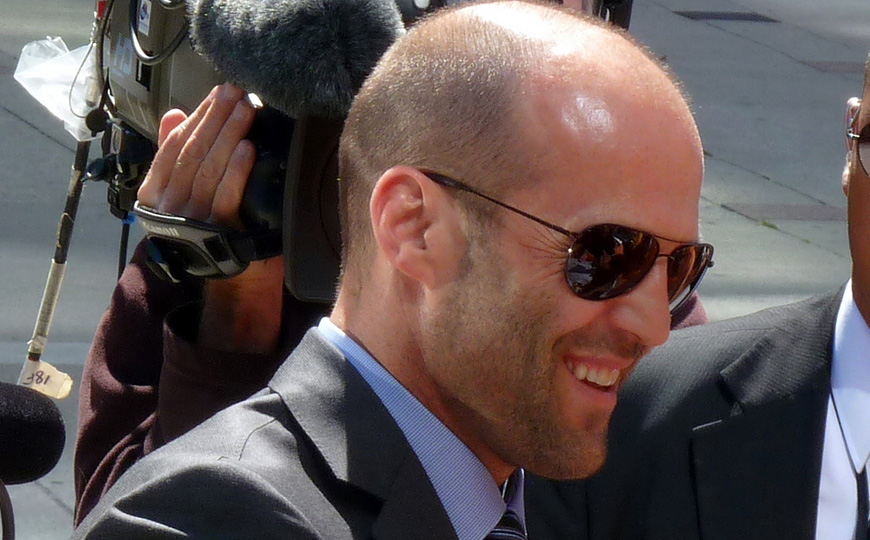 Well, no need to say why the studio chose Jason Statham to play the role of Deckard Shaw, the real bad guy in this movie, the antihero. This is Jason’s second outing as Deckard, a character perfectly suited to Jason’s on screen ‘hardman’ persona.

We all know Jason’s roles, he’s not a guy to be messed with. From his early days in the Guy Ritchie crime films Lock, Stock and Two Smoking Barrels, Snatch (2000), and Revolver, he’s now managed to make himself a Hollywood favourite starring in films such as The Expendables series and the Transporter trilogy.

Jason’s look has definitely helped him over the years, a balding crown, short sides and well-groomed stubble certainly has not stopped him from becoming a house hold name, not to mention skills which include doing most of his own stage combat stunts to knowing a thing or two about driving. Not bad for a bald guy from Derbyshire and former diver! 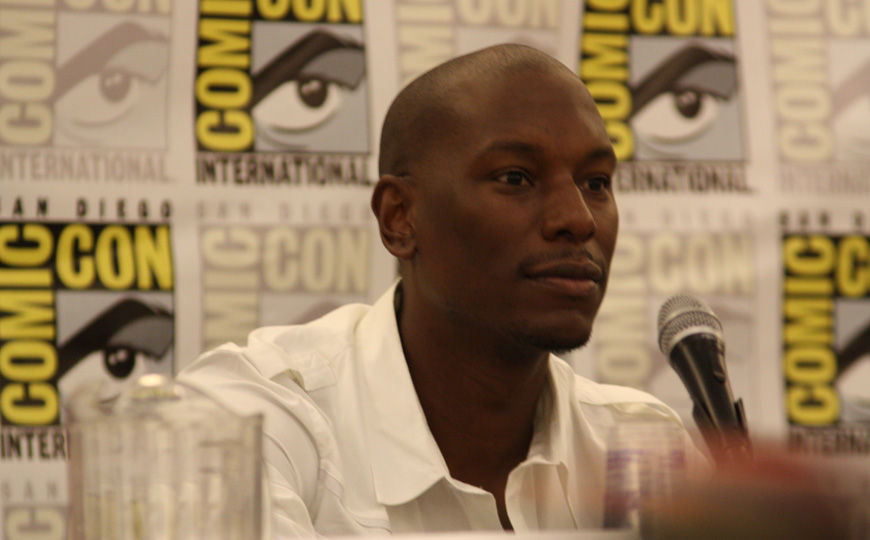 So he’s the cool guy, the good looking one with the charm and the swagger.

Tyrese’s role as Roman Pearce is played perfectly by the actor, a balance of tough guy with the charm and cheek that he manages to bring to the role. Not only is Tyrese an American Grammy-nominated singer, songwriter, actor, author, television producer, former fashion model and MTV VJ, he’s a bald guy too – need I say anymore?

Universal knew exactly what they were doing when they cast Tyrese, having a bald head also helped him in this role, not only is he seen as the cool, good looking one, the shaven look helps carry off the powerful and tough fight scenes Roman often finds himself in, definitely not for a guy constantly reaching for the comb!

To all the young guys out there losing your hair, take a look how successful these actors are – OK they might not be everyone’s cup of tea and they might not win Oscars, but they do know how to use what they have got, each one a household name, each one extremely wealthy and each one of them is bald and certainly not afraid.

So don’t worry my friends, as I’ve already said, it’s not the end of the world, you just need to find your look and be at ease with yourself – who knows, you could be the next Jason Statham.