Not only is the ridiculous stigma that once surrounded baldness now a thing of the past, but it can now be argued that a shaved head represents a truly iconic look.

This is undoubtedly a good thing too, with a recent report suggesting that up to 30% of men across the globe will be affected by premature baldness by the age of 30 in the years to come.

In the world of sport, of course, there have always been bald and shaven headed icons blazing the trail. So here are some of our favourite bald sports stars of all time.

We start with one of the best tennis players of the modern era, with Agassi having claimed eight major titles and won every single Grand Slam at least once during a glittering career.

He also completed the so-called “career slam” by winning an Olympic gold medal at the Atalanta Games in 1996, while his ongoing rivalry with US contemporary Pete Sampras thrilled fans until the turn of the century.

While Agassi was renowned for his luscious blonde locks early in his career, he began to suffer from male pattern baldness and often took to wearing wigs in order to hide his hair loss during tournaments. This famously cost him the French Open final in 1990, after his chosen wig began to disintegrate the night before the final!

Over time, Agassi decided to embrace his hair loss and shaved his head to create a clean and iconic look, coinciding with an Indian summer that saw him claim four major titles towards the end of his career.

Next up is Jason Kidd, who is renowned as one of the most versatile players ever to make his way onto the NBA floor.

Following in the footsteps of the great Michael Jordan (we’ll have a little more on him later in the piece), Kidd wore a shaved head with huge distinction throughout his career, which saw him claim one NBA Championship, Rookie of the Year in 1995 and a staggering 10 NBA All-Star selections.

Kidd had initially become synonymous with his early 2000s bleach-blond hair, before ultimately deciding to shave his head.

While we reckon that Kidd has the choice of growing out his hair if he chooses to, he definitely rocks the shaven-headed look and deserves a place on this coveted list.

While US goalkeeper Tim Howard will forever be remembered for his superhuman performance against Belgium in the 2014 World Cup quarter-final, he had enjoyed a stellar top-flight career long before this iconic match-up.

After a brief stint in the MLS during his youth, Howard was snapped up by Manchester United in the early noughties, performing with particular distinction during his first season while winning both the FA and League Cups before leaving Old Trafford.

He also made the Premier League Team of the Year while in England, having also played for Everton (he even managed to score a goal for the Toffees in the 2011/12 season).

Wherever he played, Howard always sported a shaved head, having begun to lose his hair in his 20s. This suited him well, and he definitely blazed a trail for bald athletes to follow during the noughties.

The three-time World Player of the Year winner was arguably the best on the planet between 1998 and 2003, during which time he won a World Cup, a European Championship, a La Liga title and one Champions League crown.

Prior to this, he had played a crucial midfield role with Serie A giants Juventus, with the tenacious midfielder leading the Old Lady to two league titles and a couple of Champions League finals during the mid-90s.

Of course, Zidane had already begun to lose his hair by this time, with his well-kept (albeit receding) fringe doing little to disguise the increasingly prominent bald patch that appeared on the crown.

The French wizard subsequently shaved his scalp for good prior to the 2006 World Cup (just in time for the infamous headbutt of Italian Marco Materazzi during the final), and continues to maintain the same confident look as the manager of Real Madrid.

We spoke earlier about the iconic Michael Jordan, and no list of sports stars (bald or not) would be complete without featuring the NBA legend. 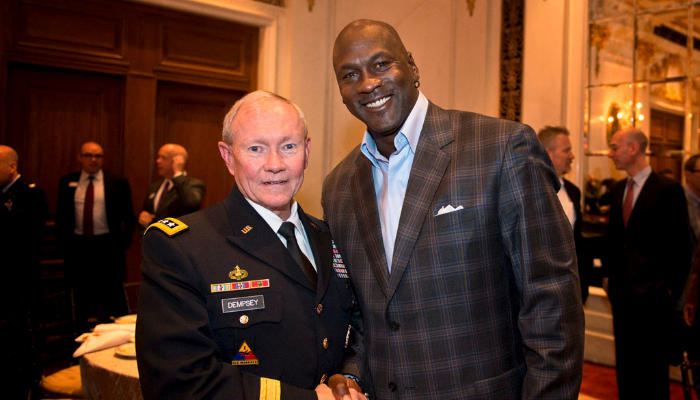 Nowadays, when you think of ‘bald celebrities’ chances are you think of Michael Jordan. But it wasn’t always the case. Jordan actually sported hair when he first entered the NBA, but it’s fair to say that his incredible career really took off when he decided to shave his head.

The shooting guard won a staggering six Championships between 1991 and 1998, while he was voted MVP (most valuable player) in six of these NBA finals. He was also the NBA’s MVP on five different occasions, the last of which followed arguably his best individual season in 1998.

The most decorated and arguably best NBA player of all-time, Jordan remains an icon to this day, while his instantly recognisable look only adds to his considerable legend!

While Mayweather’s incredible 50-0 record speaks volumes, it barely does justice to a career that’s completely unmatched in the modern era.

Also known as ‘Money’, Mayweather is also considered to be the richest athlete in the world, with an estimated net worth of more than $450 million.

We’ve scarcely ever seen Mayweather with hair either, with his shaven head accompanying most of his iconic wins. He also embellishes this clean-cut look with an extravagant sense of style, which sees him fuse formal and casual outfits with incredible ease.

When French winger Thierry Henry signed for Arsenal in the summer of 1999, few could have imagined just how this mercurial talent would evolve over the course of the following decade.

Not only was Henry converted into a prolific striker who plundered 228 goals in 377 appearances for the Gunners, but he also shaved his head to become almost unrecognisable from the youngster who arrived in London at the turn of the century.

Henry is another sporting icon who also combines his simple shaved head with a smooth and striking fashion sense, with many considering him to be one of the best-dressed footballers of the modern era.

We’re beginning to see something of a trend here; as most of these bald sporting icons just happen to be amongst the best in their respective fields.

Kelly Slater also fits this description, with this professional surfer widely regarded as the best ever to pick up a board and hit the waves.

This is evidenced by the American’s unprecedented 11 World Championship wins, while his career earnings of $4,071,360 also set him apart from even his closest rivals.

As you’d imagine for such a successful and wealthy man, Slater is also synonymous with high-fashion and particularly casual, surf-inspired outfits. He also runs a sustainable fashion brand known as ‘Outerknown’, which continues to be highly successful in North America.

When flying Dutch winger Arjen Robben joined Chelsea for £12 million from PSV Eindhoven in 2004, he had a relatively full head of hair. However, he had already begun to recede around the temples, and before the end of his time in London he was completely bald on the top of his head.

In this respect, Robben was one of the growing number of men impacted by male pattern baldness before his 30s, but to his credit he embraced his bold new look and decided to sport a shaved head for the remainder of his career.

Robben’s playing style was similarly no-nonsense, with the speedy winger renowned for driving at defenders at pace before cutting onto his left foot and delivering the ball into the far corner of the opposition’s net.

The Dutch national is also one of the most decorated players in the modern era, having won 30 major honours during his career at PSV, Chelsea, Real Madrid and Bayern Munich.

We close with another player who began to go bald at a relatively young age, despite starting his career at Real Madrid B with a full head of hair back in 1996.

By the time Cambiasso returned to Spain and made his debut for Los Blancos’ first team in 2002, however, the Argentinian midfielder had severely receded around the temples and made the decision to completely shave his scalp.

So followed the best period of the combative star’s career. Cambiasso won 19 major titles in just eight years between 2002 and 2010. This medal haul included a La Liga title and a UEFA Super Cup in Spain, along with five Scudettos, four Coppa Italias and a Champions League (amongst others) while at Inter Milan.

Make no mistake; Cambiasso’s shaved head and approach to baldness mirrored the midfielder’s playing style; with simplicity, confidence and tenacity central to everything that he did on the pitch!

And there you have it: a short list of some of our sporting icons, who just so happen to be bald. Of course, these are only a handful of countless incredible athletes, so be sure to comment below anyone we missed who you think deserves to be included in the list!

But even just these few, when combined with our list of the best bald actors, just goes to show that bald celebrities really are leading the way in all areas of entertainment – and we couldn’t be happier to see it!