No matter which way you slice it; the 90s represented a period of huge change and evolution in the UK. From the rise of New Labour to the emergence of the so-called “Lad” sub-culture and Britpop, it was also a decade of genuine hope and optimism for people across all age ranges.

Towards the end of the 1990s, we also saw the rise of the ‘Metrosexual’, with this term melding the words ‘heterosexual’ and ‘metropolitan’ to coin a new breed of male that was increasingly interested in fashion, grooming and skincare.

This particular sense of style is no longer in vogue, however, with the recently christened ‘Lumbersexual’ now considered to embody the contemporary definition of masculinity. But what is a lumbersexual, and how does he differ from his metrosexual predecessors?

What Does Lumbersexual Mean?

Like the term ‘metrosexual’, lumbersexual can be broken down into two smaller components to create an insight into its precise meaning.

More specifically, it combines the words ‘lumberjack’ and ‘heterosexual’, in order to describe an inherently masculine, unadorned and unkempt sense of style that borrows heavily from the traditional lumberjack wardrobe.

This modern iteration of man also goes by the term ‘urban lumberjack’, while there a number of distinct features that are typical of this style.

We’ll touch a little more on these features later in the piece, but in general terms, they include a thick and manly beard, mid-length and unkempt hair and the plaid flannel shirts that are synonymous with lumberjacks throughout the ages.

Ultimately, the term describes a style that’s far removed from metrosexual notions, with many believing that it has evolved to fill a perceived crisis in urban masculinity.

How Did the Lumbersexual Trend Begin?

Interestingly, it was a similar crisis at the turn of the last century that first gave lumberjacks to the world, at a time when middle-class white men (in particular) were tired, effete and increasingly anxious about their place in the world.

Around this time, The Atlantic published a romantic and glowing write-up detailing the exploits of the men working in Michigan lumber camps.

Certainly, the intense physical labour of the work and the masculine sense of bravado combined to create an intoxicating air, especially when compared with America’s stale and jaded middle class existence.

The article portrayed ‘lumberjacks’ as youthful and virulent too, creating a bold and positive iteration of masculinity that urban men of all ages and classes could aspire to across the board. 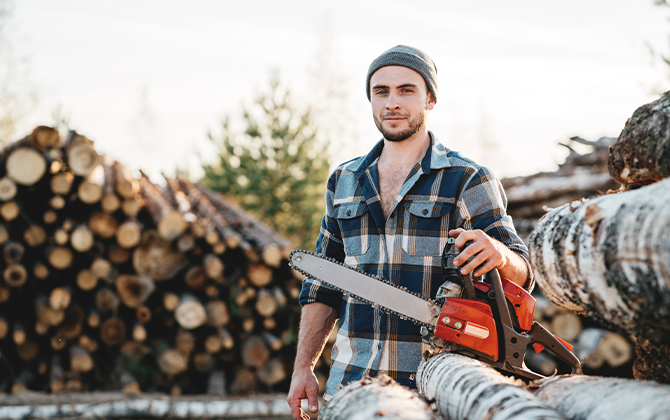 Of course, the portrayal largely ignored the brutal conditions and long hours worked by lumberjacks, while also failing to recognise the fact that they often had to operate in life-threatening conditions.

However, even the realities of the work were romanticised by some, amid suggestions that such simplistic and physically challenging labour enabled workers to be more at one with nature and enjoy a less stressful existence.

As a result, lumberjack culture became prominent in North America and Canada in the early 1900s, creating a newfound emphasis on fearlessness, resilience, and masculinity in the process.

If we fast forward to the modern age, we see a very similar vacuum in masculinity amid a generation of young men who are increasingly anxious, stressed-out and weighed down by the mundanity of office jobs.

There’s no doubt that the notion of toxic masculinity and its perception has also weighed heavily on urban some men, many of whom find it difficult to embrace traditional manliness or understand their true place in the world.

Once again, lumberjack culture has ridden to the rescue, providing a romanticised and relatively innocent idea of masculinity that’s rugged and outdoorsy without perpetuating aggression and dominance.

Make no mistake; it’s this vision that has ushered in the age of the lumbersexual, which continues to appeal to men across the globe on a mass scale.

What Makes a Man a Lumbersexual

The question that remains, of course, is what are the practical elements that make a man a lumbersexual?

It’s an excellent question, and the truth is that the modern lumbersexual has a number of physical, mental and lifestyle traits that set them apart. These include:

There are no hard and definite rules to being a lumbersexual, but to pull this look and lifestyle off you’re realistically going to have to grow some facial hair.

How you choose to grow your beard is down to you, of course, and while the classic lumbersexual beard is thick and fulsome, any kind of growth is enough to fit the criteria.

Regardless of your length of beard, however, we’d recommend growing your facial hair out for a period of weeks before shaping and trimming this accordingly. This ensures that you achieve a beard that’s as full and thick as possible, while making it easier to create a defined and desirable style.

You’ll definitely need a dedicated beard trimmer to create an accurate shape and trim, especially if you intend to blend in the hair just above the jawline. 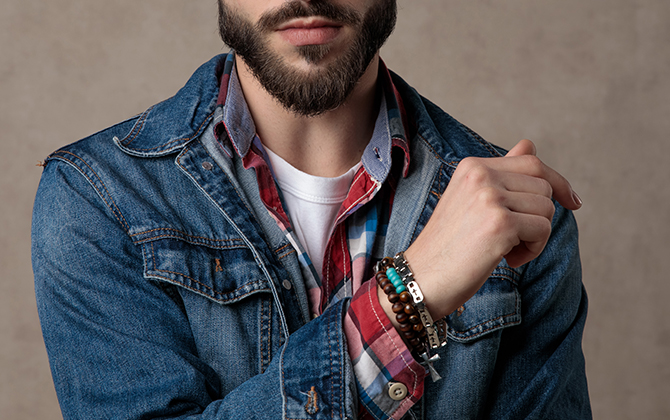 This can also help you to accurately trim the area down towards the neck, creating an even look that combines rugged masculinity and sophistication in equal measure.

In order to create a truly masculine aesthetic that suits the lumbersexual ethos, we’d also recommend creating facial hair that accentuates (or creates) a square jawline.

This can be achieved by shaping the facial hair under your chin in a straight line, while you may also want to utilise a wet razor to clear away any stray hairs around the neckline or along the cheek.

Finally, if you’re going to grow a relatively fulsome beard, it may be worth investing in some beard oil.

This serves to key purposes. Firstly, just a couple of drops helps to ensure that each of your facial hairs moves in the same direction when grooming, creating a far more even look.

Secondly, certain natural products can help to moisturise the skin underneath your beard, once again striking that subtle balance between masculinity and a good grooming routine.

Plaid flannel is synonymous with lumberjack culture and fashion, and this trend hasn’t changed in more than 100 years.

In casual circles, it’s the lighter flannel and classic red and black checkered plaid that’s most popular, with this appealing to lumbersexuals across a broad range of demographics.

Ideal for both casual social gatherings and tooling or working around the house, this light and comfortable material also allows for significantly more movement. You could even wear an undershirt underneath, which may be preferable during those cold winter months.

Now, some lumbersexuals among you may want a much more robust logger look, and one that makes you look like you’ve stepped out of one of those Michigan lumber camps back in 1900.

In this case, you’ll need a much heavier flannel, perhaps in the form of a woodsman quilted short jacket.

You can also source such garments in traditional colours such as black, red and white checkers, as this represents an excellent choice during the autumn or in the evening as temperatures begin to cool. 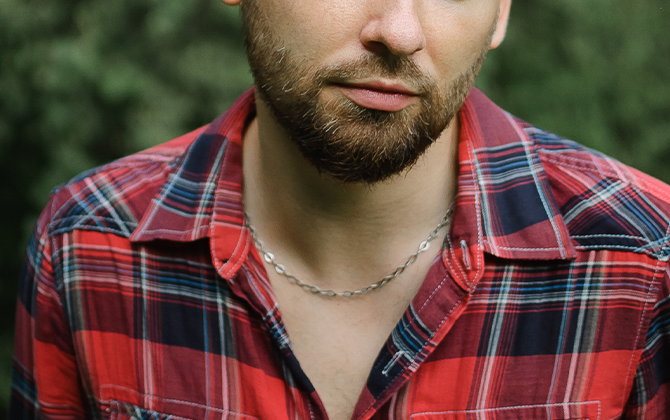 Regardless of your choice of flannel, remember that all-cotton products tend to shrink over time, so you may want to consider buying garments in a slightly larger size than you otherwise would.

Interestingly, relatively loose-fitting clothing is also central to the lumbersexual fashion sense, with this authentic trend harking back to the manual nature of lumberjacking and the need for garments that allow for movement.

The same principle applies to denim, which is often worn lose and in a way that hangs off the frame. Other than this, there are very few restrictions in terms of the type of jeans you can wear as a lumbersexual, with most people opting for a standard pair of Levi’s bootcut jeans.

Sturdy and well-stitched bootcut jeans are definitely recommended for lumbersexuals, as this creates a masculine and well-worn look over time that also compliments your choice of footwear.

The Lumbersexual’s Hobbies and Lifestyle

Whereas metrosexuals were commonly considered to be obsessed with technology and the use of devices, authentic lumbersexuals often deign to live a more simplistic and outdoorsy lifestyle.

Of course, the look often appeals to people with a love of fitness or physical activity in the first place, so lumbersexuals may well enjoy running, gym work or participating in individual or team sports.

This also taps into an innate desire to spend more time enjoying nature and the surrounding world, which is one of the key principles that first made lumberjack culture so appealing at the turn of the 20th century.

This also translates into a less materialistic outlook, and one that definitely prioritises quality over quantity.

This is reflected by everything from a lumbersexual’s choice of car to their garments, as they’re preoccupied with having the very latest technology and innovation that’s built to last rather than the biggest or most lavish alternatives. 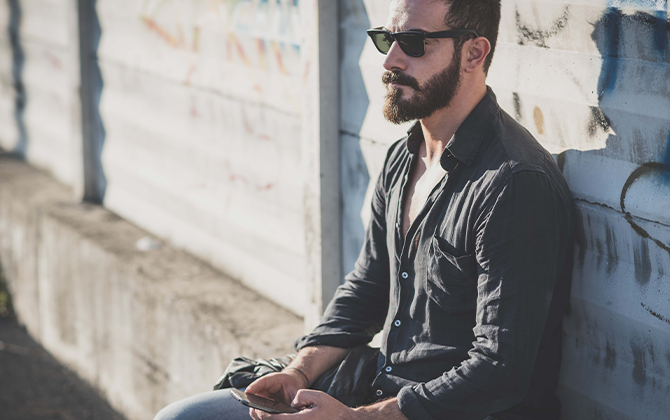 This arguably sets lumbersexuals apart from their metrosexual predecessors, with the latter were famously obsessed with the looks of the things that they buy and how they were perceived by others.

When it comes to clothing, for example, a metrosexual man will wear tight or slim-fitting garments that may not be particularly comfortable, so long as they contribute to a desired aesthetic.

Conversely, lumbersexuals are more concerned with how garments function and feel on the body, which is why a soft, light flannel shirt is such a key wardrobe staple!

Before we bring the article to a close, we thought we’d personify the idea of the lumbersexual man by providing examples of the people who embody this style. Here’s our top three:

Certain styles and fashion trends often emerge as a result of social and cultural changes, with the rise of the metrosexual a direct response to the lad culture of the early 90s in the UK.

Similarly, the age of the lumbersexual has coincided with a perceived crisis in urban masculinity, creating a strong and simple sense of style (and lifestyle) for young men to adopt and make their own.

The lumbersexual is certainly easy to recognise, while this ethos creates a strong sense of identity that many men crave in the modern age.