Losing your hair as a young male can be a stressful and worrying process.

From my own experience, I understand the impact of noticing stray hairs fall from your head on a regular basis, as your mind begins to race and you consider the potential causes.

While hair loss in men aged between 18 and 25 can be an early indication of male pattern baldness (as it was in my case), it can also be the result of hair follicle growth phases or temporary conditions such as stress.

So, there’s no immediate need to panic if you begin to experience hair loss, although you’ll probably want to get to the bottom of this as quickly as possible.

In this article, we’ll ask how much hair loss is normal in young males, while also appraising the symptoms that indicate the onset of male pattern baldness.

How Much Hair Loss is Normal in Young Males?

As I’ve already said, hair loss itself is a normal and natural process and one that is not to be feared.

In fact, it occurs as individual follicles go through their organic phases of growth, with individuals most likely to lose hair during the Telogen stage.

This is the third and final stage of hair growth, and one that occurs after the transitional Catagen Phase (which lasts for approximately 10 days).

The Telogen Phase is a resting period when individual hairs are released and begin to fall out.

At this stage, you’ll probably notice a few stray hairs on your pillow or shirt collar, with the exact rate of hair loss depending on numerous factors including stress levels and your unique genetic make-up.

It’s also important to note that every single hair follicle is independent and progresses through various growth cycles at different times. This is generally considered as a positive thing, as otherwise you’d find that all your hair would fall out at once during the Telogen phase!

The question that remains is how much hair loss is normal in young males during this individual phase of growth?

There are various estimations about how many hairs we should lose on average during this phase, but it would not be unusual for young males to lose between 25 and 150 hair follicles each day.

There’s also a generic assumption that we should lose between 100 to 150 hairs each day, and this based on the logic that the average human scalp (which contains 10,000 individual follicles) sheds between 1% and 2% during the Telogen growth phase.

This type of hair loss is barely noticeable, and if you find yourself shedding such a small number of follicles then the chances are that you have nothing to worry about!

And Now for Some Science – The 60 Second Hair Count

Aside from these rough estimations, there’s no standard or fully verified methodology for assessing the average number of hairs it is reasonable to lose on a daily basis.

Thanks to the Archives of Dermatology, one study has highlight a reliable technique for evaluating your own rate of hair loss over a fixed period of time.

The study in question included 60 male respondents, each of whom was in good health and showed no evidence of male pattern baldness.

Half of these men were aged between 20 and 40, with the over half aged between 41 and 60, and each respondent was given the same brand of shampoo and combs before being told to wash their hair for three mornings in a row.

Before shampooing on the fourth morning of the study, the men were told to comb their hair forward over a white towel or pillowcase for a total of 60 seconds.

Then, they were tasked with counting the precise number of hairs lost in this way for three consecutive days, before completing this process on a bi-annual basis.

Interestingly, the results revealed that the men aged between 20 and 40 lost an average of 78 hair follicles during the study, whereas the older demographic lost an estimated 43 hairs.

With repeat tests also delivering similar and consistent results, this has been deemed as a reliable methodology and one that also underlines how younger males are susceptible to natural and organic hair loss.

Although I never had the opportunity to test this myself when I first started to lose my hair, it’s definitely a technique that can be easily replicated in the typical home.

Just remember to use the same shampoo, conditioner and comb for the duration of the test, while also using a colour contrasting pillowcase or towel to ensure an accurate count.

Similarly, I’d recommend that you repeat this test every month if you’re concerned about your rate of hair loss, and track the results over the course of a year.

If You’re Experiencing Higher than Average or Worsening Hair Loss, What Could be Causing This?

At this stage, you’ll have a far greater understanding of hair loss and the rate at which follicles are leaving your scalp.

Even if you notice that you’re shedding hair at a higher rate than expected, you should know that this does not automatically mean that you’re suffering from the early stages of genetic or male pattern baldness.

Instead, if you notice that your hair is falling out at a significant or worsening rate, there could be a number of temporary triggers that are responsible.

Two of the most commonplace are restrictive dieting or an ongoing viral infection (complete with a fever).

In the case of crash diets, bodies can suffer as a result of improper nutrition, which in turn translates into sudden, albeit temporary hair loss.

A sustained lack of protein can be particularly impactful on individual hair growth cycles, for example, as can a diet that includes little or no essentially fatty acids (including Omega-3 and Omega-6).

A lack of iron can also impact on hair growth, although this is more likely to affect women rather than men.

Similarly, having a viral infection or a high fever over a sustained period of time can also minimise growth and reduce the overall volume of your hair, creating an obvious visual impact that alter your  appearance in the short-term.

Interestingly, I’ve discovered that both of these triggers have an almost identical impact on hair growth.

More specifically, you’re likely to see symptoms between four and six months after embarking on a restricted diet or contracting an illness, at which point a process known as Telogen Effluvium can occur.

This is when the Anagen phase of hair follicle growth is cut abruptly short, causing a high volume of hairs to enter the Telogen stage at the same time.

As I touched on earlier, this will cause you to lose a significant amount of hair in a short period of time, so it’s important that you consider these triggers when trying to identify a cause.

These triggers also highlight how sensitive the hair growth cycle is to external factors and constant challenges, and how the body’s natural reaction can replicate the symptoms of male pattern baldness.

As you’ve probably guessed, stress is another factor that can is thought to trigger temporary hair loss (or at least a temporary increase in the number of follicles that are released each day).

Although there is not a huge amount of medical data or research to confirm stress as a key trigger of hair loss, it’s generally accepted that individuals who suffer from extreme anxiety may suffer from a number of conditions that can impede hair growth or reduce volume.

These include the aforementioned Telogen Effluvium, which is characterised simply by a higher number of follicles falling out on a daily basis.

Anxiety can also be a trigger for the condition known as Alopecia Areata, where large clumps of hair are suddenly lost from your scalp and the surrounding area.

Anxiety or almost constant stress can also lead to the habitual condition known commonly as Trichotillomania, which causes sufferers to pull hairs from their head without even realising what they are doing.

While these are extreme triggers for sudden or temporary hair loss, it’s amazing how many sufferers fail to make the connection between their anxiety and changing hairline.

Realising this can help to identify the cause of your hair loss, while pointing you in the direction of a viable solution.

What are the Signs of Male Pattern Baldness?

If you find that you continue to shed hairs at a considerable rate but have ruled out the above factors, there’s a strong chance that you could be experiencing the onset of male pattern baldness.

There a couple of points to consider before arriving at this conclusion, otherwise you risk making a snap-judgement that is well wide of the mark.

Firstly, male pattern baldness is a genetic condition, and one that will impact around two-thirds of men by the time that they reach the age of 35.

In fact, 25% of sufferers will showcase visible symptoms by the tender age of 21, and I am one of the many individuals who can testify to this.

Secondly, I’m also here to say that male pattern baldness follows a specific and well-known path, and one that causes your hair to fall out in an easily identifiable manner.

The name of the conditions hints at this, but it’s worth bearing in mind when attempting to appraise your symptoms.

So, how exactly does male pattern baldness present itself?

One of the first and most renowned signs of male pattern baldness is gradual and sustained hair loss, originally around the crown and at the front of the scalp. 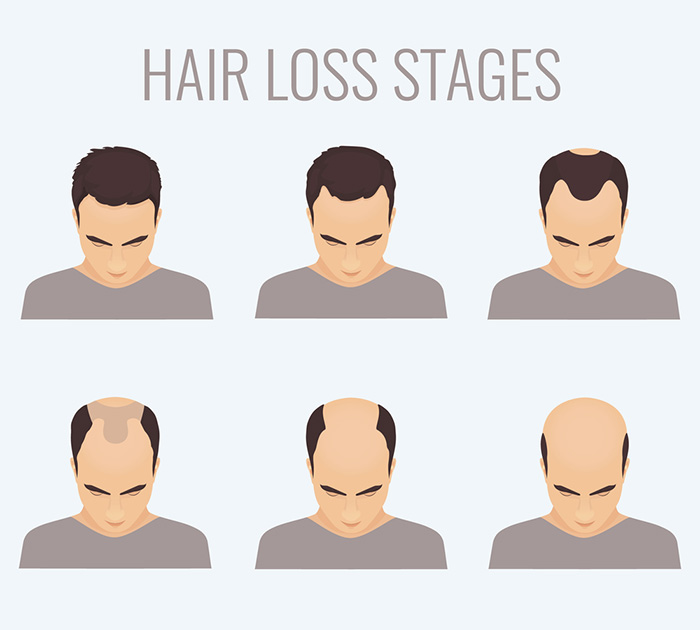 This is also one of the most obvious symptoms of male pattern baldness, and one that remains synonymous with the condition in the UK.

This is typically followed by the regression of the temple hairline, which is a little more subtle and less obvious to the naked eye.

Still, when combined with the loss of hair from around the crown, this creates an “M” shaped forehead that is clearly visible from whatever hair remains on your scalp.

At this point, your hairline will continue to recede at the same time that your crown spreads out, causing hair loss to progress at the front and back of your scalp before meeting in the middle.

By this time, you’re at an advanced stage at male pattern baldness, and it was at this phase in my own hair loss that I took the ultimate decision to shave my head.

If you’re testing your hair loss at this stage, you’ll probably notice that you’re experiencing a consistently higher rate of shedding from specific areas around your scalp and crown.

You should try to visually appraise the nature of shredded hair at this time, as follicles in affected areas may well be of variable lengths, textures and thickness.

The purpose of this guide is two-fold.

Firstly, I want you to understand the nature of hair loss in young males and the typical rate of shedding you can expect during this phase in your life.

Secondly, I want to identify the potential causes of excessive, sudden or temporary hair loss, while also determining the unique symptoms and progression that are indicative of male pattern baldness.

If you do find that you’re experiencing male pattern baldness, how you choose to tackle this is entirely up to you.

From my own experience, I would advise embracing this with confidence and taking control of your circumstances by shaving your own head, as this is extremely empowering and can saves you thousands of pounds in short-term and ultimately futile solutions.

Remember, male pattern baldness is genetic and impossible to stop over time, so there is no single treatment that can halt it in the long-term.