Not only does this mean that the man destined not to be king is following in the esteemed footsteps of his brother and father, but it also puts him in a large majority of everyday citizens who have seen their hair thin prematurely.

In fact, around two-thirds of men are thought to experiencing thinning hair by the age of 35, while a whopping 85% of males will have seen considerable hair loss by the time they reach 50.

What’s interesting in Prince Harry’s case is that he seems to be extremely self-aware and comfortable with the prospect of going bald, as he embraces his reality and the progressive nature of male pattern baldness.

Below, we’ll look at what we know so far about Prince Harry’s hair loss, and ask why he’s setting a positive example for anyone who loses their hair prematurely.

Prince Harry’s Thinning Crown – What do we Know so Far?

For fans of gossip columns and devoted followers of the Royal Family, the news that Prince Harry is losing his hair will come as no surprise.

We’ve certainly seen evidence of a thinning crown in the last 12 months, while the young prince also showed a considerable amount of scalp through his ginger locks during a recent trip to Lesotho in Africa with his charity.

Harry is also well-aware of the fact that he is losing his hair, as was revealed during a tour of New Zealand when the prince regularly met with fans.

During one particular exchange, the 30 year-old was told by a fan that he looked “just like his father”. In response, Harry quipped that “he was losing his hair like his father too”, and he seemed genuinely relaxed and jovial about his thinning crown. 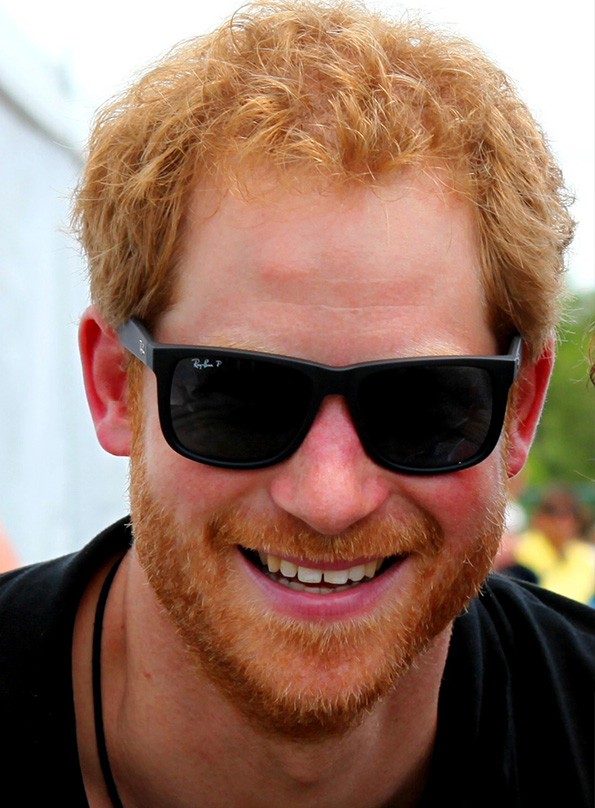 His royal hair loss has subsequently become a prominent talking point in the national media, with every television interview and appearance raising further questions about the prince’s impending baldness.

Now for the Science – Why is Prince Harry Losing his Hair?

Not only is Prince Harry’s hair loss and impending baldness indisputable, but there is also strong evidence to suggest that this is the result of male pattern baldness.

Firstly, the prince’s hair loss is clearly progressive, while it is also following the individual stages that characterise male pattern baldness.

With this condition, one of the first visible signs is a symmetrical or triangular recession at the frontal hairline.

This can create either an M or a U pattern at the front of the head, and while the prince tends to grow his hair long to disguise this such a pattern is becoming increasingly evident to discerning observers.

With the hairline also receding with every passing public appearance, Harry is clearly showcasing the formative signs of male pattern baldness and genetic hair loss.

At the same time, male pattern baldness also causes the hair around the crown and the temples to become progressively thinner, in some instances leaving the back and the sides of the head almost completely bald.

There’s no doubt that Harry is losing hair from the scalp and the crown, and at a rate that suggests his hair loss will becoming increasingly obvious over the course of the coming months.

If the Prince is showcasing the initial signs of male pattern baldness, he’s certainly in good company in his family.

In fact, the nature of the prince’s hair loss will probably be familiar to fans of the Royals, with Prince Charles, Prince Philip and Prince Edward having also experienced similar issues in their youth.

Even his older brother William has progressively lost his hair during the last few years, with the most likely heir to the throne now completely bald having opted to shave his head. 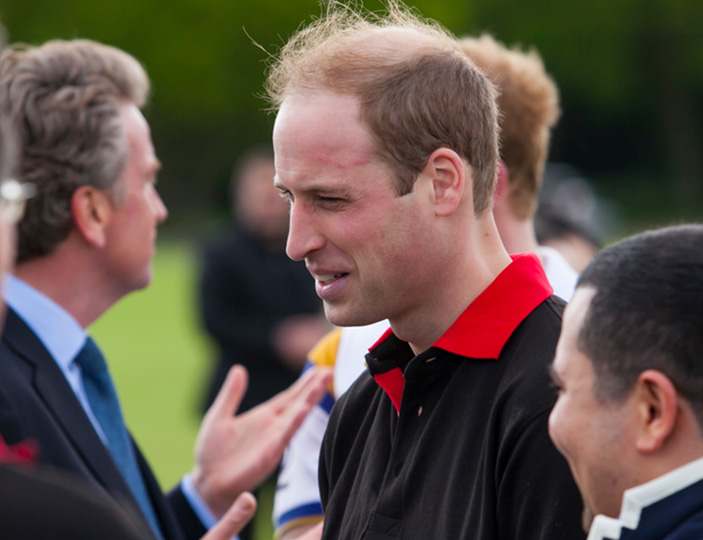 So not have all the males in Prince Harry’s family experienced considerable and unstoppable hair loss, but these instances have also followed an almost identical pattern and progression over time.

This reaffirms the hereditary and genetic nature of male pattern baldness, and the inescapable fact that this is completely untreatable in the long-term.

Recent scientific studies have shed further light on male pattern baldness, while also highlighting the its underlying genetic cause.

One of the most comprehensive pieces of research made some really interesting findings, such as the fact that male pattern baldness can be inherited from both the father’s and the mother’s side of the family.

So, while it’s fair to surmise that the majority of genetic traits (including hair loss) are passed on through imprinted genes on the father’s side, male pattern baldness can also be passed on by females.

A more recent study at McGill University in London also identified two genetic variants that increase the likelihood that an individual will experience male pattern baldness.

More specifically, these genetic variants produce a sevenfold increase in the risk of progressive baldness, while they can be passed throughout the generations to create a family history of hair loss.

While more research is required to determine how these genes trigger male pattern baldness, it’s likely that they have a direct impact on the human body’s sensitivity to testosterone and Dihydrotestosterone (DHT).

Being overly sensitive to testosterone and DHT is thought to be the primary cause of male pattern baldness and the loss of scalp hair, so any associated genetic condition is likely to relate directly to this.

Firstly, Prince Harry is clearly showing clinical signs of male pattern baldness, which is an hereditary condition that remains prevalent in his family.

Secondly, we can surmise that the prince’s hair loss is both progressive and incurable, regardless of the numerous, short-term treatments that are offered across the globe.

If we accept that the prince’s hair loss is irreversible, then his response is truly admirable and should serve as an inspiration to anyone who experiences similar symptoms at a relatively early age.

After all, Harry has not responded negatively or looked to spend his money on treatments that simply delay the progression of male pattern baldness.

Instead, he has accepted his reality and become comfortable with the idea of going bald, while not being afraid to indulge in the type of self-depreciating humour that us Brits love!

Not only this, but the Prince’s decision to positively embrace his premature baldness also appears to have done wonders for his confidence and love life.

From my own, personal experience, I can say that much of the anxiety surrounding male pattern baldness revolves around the pursuit and failure of so-called restoration treatments, and by recognising this Harry has been able to maintain a positive mind-set and an overtly confident demeanour even as his hair continues to grow thinner.

This innate confidence has certainly boosted the Prince’s standing among the female community, with his stunning fiancée Meghan Markle clear evidence of this. Ms. Markle certainly looks good on Harry’s arm, and the future king can look forward to a bright and exciting future!

It’s probably fair to say that marrying Meghan Markle is preferable to spending thousands of pounds on hair restoration treatments that simply do not work in the long-term, and Harry should therefore be congratulated for getting on with his life rather than dwelling on things that remain beyond his control.

Additionally, both Prince Charles and Prince William have also used humour and positivity when dealing with the onset of male pattern baldness.

Remember, Charles teased William mercilessly about his hair loss during his son’s own Wedding Breakfast, while the natural heir to the throne joked publicly about his thinning hair after the birth of his son Prince George. 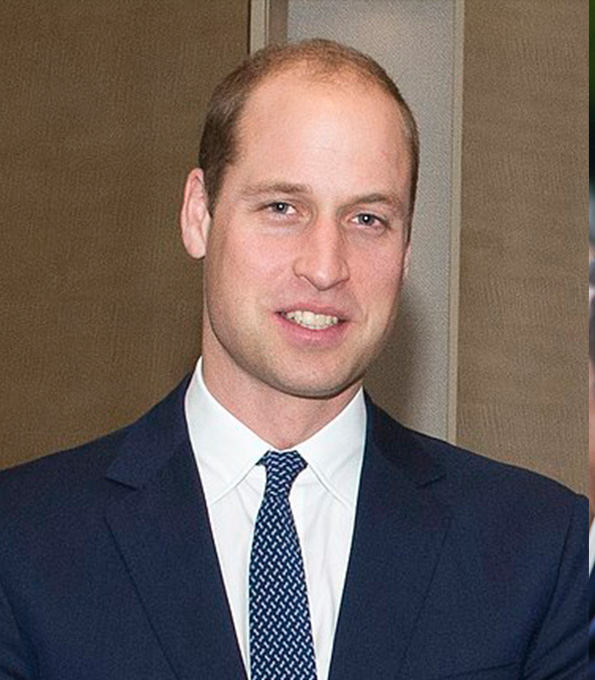 In the case of William, we’ve also seen a pragmatic and proactive response to the unstoppable progression of male pattern baldness.

While the media spent months speculating that William would invest his money and time in pursuing one or more hair loss treatments, the down-to-earth prince simply picked up a pair of clippers and completely shaved his remaining locks.

This created a clean and bold look that took years of his appearance, while removing the thin strands of hair that remained around the crown and the temples.

Beyond this, is also underlined the benefits of confronting male pattern baldness and seizing control  of its progression, and we wouldn’t be surprised if Harry followed suit at some point during the months ahead!

The Bottom Line – Male Pattern Baldness May be Inescapable, but there’s Nothing to Fear

Having experienced male pattern baldness myself at the tender age of 17, this writer fully understands the temptation to believe that this condition can be reversed through treatments and prescribed products.

If you ever needed proof that male pattern baldness was incurable (other than the compelling argument made by genetics), then the hereditary hair loss experienced by the Royal Family should provide this.

After all, this family has the financial resources to invest in any treatment that they desire, and yet its male members have chosen to accept their premature hair loss and proactively adapt their look accordingly.

Not only this, but they have also maintained their positive and progressive outlook even under the intense gaze of the public eye, which has scrutinised their hair loss and turned a deeply personal experience into a national talking point.

So what can take from this?

Clearly, male pattern hair loss is nothing that should worry us, particularly if some of the highest-profile and wealthiest individuals in the world choose to live with this rather than seek treatment.

Similarly, the royals are also proving how it’s possible to go bald gracefully and with good humour, while in Prince William’s case it’s also evident that shaving your head can afford you control of your hair loss and your overall look.

We certainly expect Prince Harry to follow suit in the future, as he’s been set a fine example by his family. This is an example that you can follow too, if you ever find yourself losing your hair progressively or prematurely in the future!